Papa John Has Nothing on Planned Parenthood's Margaret Sanger 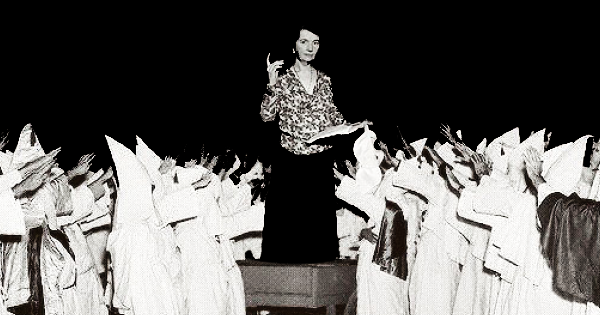 Margaret Sanger addressing a group of KKK members in the early 1900’s
Why Hasn't NAACP Denounced Racist Comments by Planned Parenthood's Founder?
Contact: Rev. Clenard H. Childress Jr., 201-704-9325
MONTCLAIR, N.J., July 15, 2018 /Christian Newswire/ -- NAACP religiously monitors the world for racist comments made by dignitaries, especially elected officials and organizations opposing the Democrat Party. The bias demonstrated is consistent with the decline of relevancy on issues adversely affecting the very people they were created to protect. When informed and genuine advocates of the African American community see the devastating effects of eugenic policies perpetrated upon people-of-color, then learn the origins and racist comments as well as practices of the leading abortion provider Planned Parenthood, they are left baffled at the silence of America's most prestigious defenders of civil rights. Let me enumerate some undeniable and inconvenient truths:
1.)  1,786 African American children are killed each day by abortion.
2.)  Abortion is systemic and deliberate and the leading provider of abortion in America is Planned Parenthood.
3.)  52% of All African American pregnancies end in abortion
Margaret Sanger, the founder and chief facilitator of the eugenic and systemic plan of abortion. She was an avowed White Supremist and was quoted as saying, "...colored people are human weeds and need to be exterminated... reckless breeders... spawning... human beings who never should have been born..." Margaret Sanger, "Pivot of Civilization." Sanger was in her time the leading advocate of the eugenics movement, specifically of negative eugenics, which promoted the reduction of sexual reproduction and sterilization of people with undesired traits or economic conditions. She wrote, "The most merciful thing that a large family does to one of its infant members is to kill it." -- Margaret Sanger, "Women and the New Race" (Eugenics Publ. Co., 1920, 1923)
Margaret Sanger has nothing on pizza king " Papa John" The University of Louisville said it will remove the Papa John's name from its football stadium, and that it will rename the John H. Schnatter Center for Free Enterprise at its business college. Why? He used the "n" word and thus his name will be removed. Yet, Margaret Sanger's name is still heralded and her bust is still in the Smithsonian Portrait Gallery next to Martin Luther King, What's up with that! After all this is far more important than pizza.
L.E.A.R.N. the Life Education And Resource Network will peacefully protest July 16 and 17 at the NAACP Convention in San Antonia, Texas demanding a resolution form the NAACP denouncing the racist comments of Margaret Sanger and request that all awards, plazas, streets along with icons and honorable mention be removed from government buildings and the public square.