The Miracle of Little Maria's Rescue From Abortion 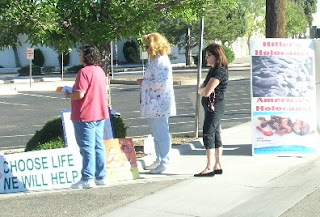 September 5, 2007 (LifeSiteNews.com) - At numerous North American abortion clinics dedicated, prayerful pro-life sidewalk counselors attempt to save mothers and their babies from abortion. Many babies are in fact saved and their mothers helped to continue with the pregnancy and raise their saved children.

What is not widely known are the often amazing, unexplainable occurrences that result in many of these successes. LifeSiteNews staff have heard numerous such stories which are sometimes enough to cause tears or raise goose bumps on one's skin.

The following is one such story about the uncanny appearance of a stranger who made all the difference in the world (or shall we also say, out of this world) to the life of little Maria.

The story was first told to LifeSiteNews.com's Steve Jalsevac and John-Henry Westen while they were staying at the home of pro-life friend Boots Sargis during last year's Washington March for Life events. The story can now be told because little Maria was born last week.

It was a cold Saturday morning last December when I arrived at the local abortion facility that I have been going to for years. I was late and most of the other regular sidewalk counselors and prayer ministry people were already there. George was standing at the North driveway across the side street from the 7-11 store. For the first time, we decided to trade cell phone numbers.

I walked up the street and stood at the South driveway praying for the opportunity to offer hope and help to the hopeless who would be entering the abortion facility.

My cell phone rang. It was George. He said "Quick, I need someone who speaks Spanish." Normally there is a Spanish speaking sidewalk counselor available, but not on this particular morning. What could we do?

I asked the small groups of people who were praying the rosary if anyone spoke Spanish. No one did. I was wearing a small poster of Our Lady of Guadalupe which had been touched to the Tilma of Juan Diego in Mexico. I prayed and put the situation in her loving hands.

George directed me across the side street to the couple who were looking at the Spanish pro-life literature which he had given them. The fact that they had possession of the literature itself was a small miracle.

It has been said that "the battle lines are drawn" in front of the abortion facilities. This is the truth. Good confronts evil there, and we pray that it is always with prayer, love and compassion.

Besides the pro-lifers there is a group of pro-abortion "escorts" always present. They escort the women from their cars into the facility in order to make sure the women go through with their abortions and avoid us. Usually the escorts tell the women that we are not telling the truth, want to harass them, and that they should ignore us.

When someone who has come for an abortion takes our informative literature, the "escorts" take it from them with a variety of unholy explanations. Some of these escorts are trying to justify their own abortions, some are there because of disordered logic and misplaced charity, and some ….. only God knows.

As I approached, the young couple was deeply engrossed in the literature. I smiled and said "no habla espanol." I was feeling anxious because I knew that it was only a matter of time before one of the "escorts" crossed the street to take the literature and them … to the abortionist.

"Cafe?" The word came out of my mouth. "That's a good idea, I thought. Where did it come from?" Buying a cup of coffee at the 7-11 would remove them from "escort" territory.

As we walked toward the 7-11, it occurred to me that there might be someone inside who spoke Spanish and English and who would be willing to at least translate for us. Just then the door opened and out came a nicely dressed man with black hair who looked like he was in his mid-30's. I asked this complete stranger, not knowing anything about his views on abortion, if he would be willing to translate.

I explained as discretely as I could that this frightened young couple was seeking an abortion, and that I wanted them to know that our church was ready to help with material, spiritual and emotional support. We would do everything we could to help them.

Enrico (the stranger) paused at this totally unexpected request, looked at me and then said, "This is a very good thing that you are doing. Let me talk to them." I was able to understand a little of what Enrico was saying as he offered support on behalf of the church in a very normal tone of voice.

Suddenly, his voice became passionate and louder. Tears welled in his eyes. At that moment I knew that Enrico himself had been personally involved in an abortion, another father who suffers silently.

He then began to tell me in English what he was telling Tomaso and Rosa in Spanish. He told them that seventeen years ago he lost his son to abortion, and that he has thought of him every day since. He said that he was deeply in love with the very beautiful mother of his son. After the abortion, they were unable to look at each other without thinking of the dead baby, and as a result they separated.

Enrico continued to talk to the couple for over 20 minutes; he was heaven sent. Never could we have found a better sidewalk counselor. He even told Tomaso that he would help him find work. Tomaso and Rosa, who had a two year old child at home, were deeply affected by Enrico's counsel. They confided that they were seeking the abortion because they had no money or resources for another child.

It was now around 8:15 a.m. Enrico had to continue on to work, so another sidewalk counselor, Rich, and I invited Tomaso and Rosa to the 8:30 Mass with the idea that we would speak with the priests afterwards and make an appointment at the crisis pregnancy center.

The priests at our parish were compassionate and helpful. The Spanish speaking priest spoke to them for quite awhile. Tomaso wasn't sure if he ever had been baptized, but he was already talking about the Baptism of his child. I pointed out to him that God must have a very special job for his child because HE certainly went to a lot of trouble to protect her.

Candy happened to be praying in Church when we arrived with Tomaso and Rosa. From that day until now she has taken on the role of "abuelita" … Grandmother. She has been an angel to all of us as translator, driver, encourager, prayer support, and more. Rich also has been ever so helpful to this struggling and brave couple who chose life. Our parish pro-life groups, Project Gabrielle, Catholics United for Life, and St. Anne's Helpers for Life have delivered on the promises that we made that December morning.

Little Maria was born on July 27th. Truly she is the most beautiful little one I have ever seen in my life. Maybe it's because I know how close she came to being destroyed… Murdered in the womb. When you hold her, the reality of abortion seems impossible. How could it be? This precious little bundle of life is the answer to every abortion debate.

Rosa and Tomaso are filled with joy. It is beautiful to see them lovingly care for their little one. Now each year they will celebrate the birthday of their child in July instead of dreading the anniversary of her death in December. It's a tragedy that the country that offered them a better life gave them the choice of destroying it.

I hope and pray that some who read this story might consider joining the groups who pray in front of abortion facilities. We Christians should be there with compassion and love for the unborn in their final hours and to intercede for their parents.

Once a woman stopped to tell us that her daughter had made an appointment for an abortion the previous week. When she arrived and saw people praying the rosary, she found the strength to leave and to tell her parents of the life in her womb. The grandmother returned to thank us for being there and for giving her grandchild a birth day in the future.

All Christians have a responsibility to stand against this destroyer that our society calls "choice." When we face Our Lord someday, will we be able to say that we defended these victims … mothers, fathers, babies ….? That we worked for the truth? We are all accountable at some level, and there are many ways to stand for life.

Some who really cannot be present at the facilities pray at home or in Church for the women who are considering abortion.

There are many other ways to help including volunteering at local crisis pregnancy centers and joining the many pro-life ministries.