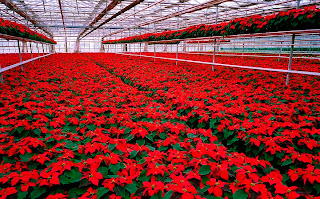 November 20, 2007 (LifeSiteNews.com) - Two years ago, San Diego based pro-life activist James Hartline used his on-line report to organize and promote a national boycott of Paul Ecke Ranch Christmas poinsettias due to the Ecke family's extensive history of financial support for abortion-giant Planned Parenthood (PP). Hartline is now claiming a major boycott victory. Recent local reports indicate that, since the 1920's, this will be the first year the principal poinsettia producer in the nation, Ecke Ranch, will not produce and sell their typically large crop of the festive Christmas plant.

The Ecke family's financial and ideological support of PP is well-documented and extends back through the years. Multiple members of the Ecke family are listed on the Planned Parenthood of San Diego's 2006 annual report within the 'Margaret Sanger Donor Circle'.

Mrs. Elisabeth Ecke, referred to as "a longtime champion of Planned Parenthood and the reproductive services it provides", is listed as also having bequeathed funds to PP upon her death. In 2005, several members of the Ecke family contributed $250,000 to fund the renovation of the local PP clinic which was in turn named in honor of the family matriarch, Elisabeth Ecke.

According to an article in the San Diego Tribune Review, the Ecke Ranch has decided to license Armstrong Garden Centers to both grow and sell poinsettias under the Paul Ecke Ranch name. According to ranch officials, the change is not expected to cause any great diminution to the ranch's overall income since they assert that selling the full-grown plants does not constitute the bulk of their business. However, according to the Tribune Review, the ranch typically grows and sells anywhere between 300,000 to 400,000 full-grown poinsettias each Christmas season. This year, they will produce only 6,000 to be used for promotional purposes.

While the Tribune Review article makes no mention of the pro-life boycott, Hartline is convinced that it has affected the Ecke business. "It is clear that our boycott will continue to hurt the Ecke name and their poinsettia sales. I fully believe that the Eckes know that their name is bad news among pro-lifers. I believe their decision to license out their name is, in part, due to our ongoing boycott."

Hartline encouraged pro-lifers to continue the boycott of the Ecke poinsettias saying, "We must understand that the Eckes will continue to profit off of the poinsettias being produced by Armstrong Gardens, because the Ecke name will still be used."

"I am convinced that our boycott has created major problems for Ecke Ranch. Without churchgoers purchasing their poinsettias, the Eckes will have a real hard time getting that extra cash they need to fund Planned Parenthood. Babies are more important than giving the Eckes blood money for their poinsettias!"

To contact Armstrong Garden Centers who will be selling Ecke poinsettias this Christmas: