Good Deed at a Busy LifeChain 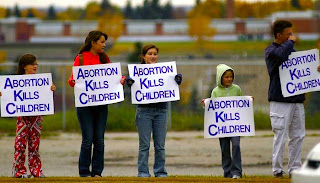 NORTH YORK, Ontario, Nov. 2, 2007 (theinterim.com) - We had a pro-life guest for dinner from out of town recently. She had been doing pro-life work for ages and was discouraged. She started to list our defeats and setbacks and hers would have filled a phone book if I hadn't interrupted her.

"Wait a minute!" I cried excitedly. "I know a guy who helped organize a LifeChain this year that created a horrendous traffic jam at Bayview and Finch, which is a very busy intersection in Toronto. He had over 300 people at a Life Chain!" (There were many intersections with LifeChains throughout Toronto that day.)

"What?" she queried. "Over 300 people at a LifeChain? Did the media know about this?"

"No and if they did," I said, "they would probably say there was only 150 people there. You know, the media are famous for shrinking pro-life crowd numbers. They're also famous for grotesquely multiplying crowd numbers at a gay parade - like the one in Toronto. They have half of Toronto leaning out of windows on Yonge Street, joyfully screaming obscenities."

The LifeChain organizer said it was so crowded at a bus stop at the intersection, with people lined up so thickly, that an elderly deaf gentleman with his young interpreter were unable to get through the crowd to board a bus. The bus came along, stopped and not seeing them, kept on going. They were both greatly upset.

A gentleman saw what had happened and asked the interpreter where they were going. The interpreter said to the local "Y" nearby. This gentleman felt sorry for what had happened and volunteered to drive them both there. They were delighted to accept the offer and the volunteer got his car from the adjacent Lutheran church parking lot, drove them there and returned shortly afterwards.

The organizer thanked him profusely after seeing this good deed and the gentleman said: "Well, we don't want them to think badly of LifeChain."

It was impossible, the organizer said, to sign up and give signs out for the LifeChain hour. He had four clipboards in service, but they couldn't process the people at LifeChain fast enough and many didn't sign up but elected to stand silently and prayerfully beside someone who had a sign.

The associate pastor at Blessed Trinity Church, Father Hansoo Park, stood on Bayview Avenue and turned his sign, "Abortion kills children," around and printed in large letters: "Honk if you're pro-life!" Thank goodness, the organizer said, there were more thumbs up than horn honking and just three or four thumbs down.

Msgr. Ambrose Sheehy, the pastor of Blessed Trinity, was also there and appeared so delighted with the turnout, you'd swear he had been just named a Cardinal.

What brought out such a large crowd for LifeChain? The organizer said that just five years ago, the Di Fonzo family with their seven boys were a third of the participants. Remember the old line about the baseball stadium: "If you build it, they will come?" It was the leadership of Msgr. Sheehy and Father Hansoo that brought about the amazing numbers. They built the stadium and the people came.

Strong support from the pulpit works. Weeks before, sermons on pro-life activities were given, often daily at the morning Masses. Posters in the foyer and solid plugs in the church bulletins over the weeks before also helped. Their active participation in LifeChain on the Big Day made it the place to be. People you would have never thought would be there were there.

Thousands of cars drove by and it's hard to ignore that big a crowd. Father Hansoo gave a brief talk and led a prayer afterwards. He said: "Who knows how many people have been influenced by what they have seen here today?"

Due to time restraints, it was only possible to take up a collection to cover costs from half the people there. However, those that were approached gave generously. There was a sea of $20 bills. One U.S. visitor gave us a U.S. $20 bill, which the organizer announced we would accept at par.

One new participant told the organizer that maybe on Judgement Day, St. Peter might ask him: "What did you do to save the unborn?" "I'll be able to say: 'I was at a LifeChain at Bayview and Finch.'" With hundreds others.

Frank Kennedy is a long time columnist with The Interim newspaper (Canada's life and family Newspaper)
This article appears in the November 2007 Interim (http://www.theinterim.com)..

Back to Top | Email to a Friend | View Story on LifeSiteNews.com
--
"In Cordibus Jesu et Mariae"
Posted by Deacon John at 7:26 PM