As we approach the Feast of The Immaculate Conception: 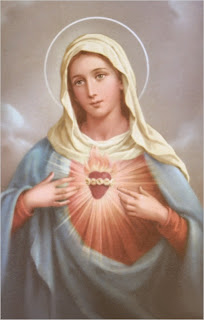 The Triumph of Mary's Immaculate Heart


People sometimes ask me what they can do to counter the negative effects of our decadent society. My answer always comes down to two things: be truly Catholic and be Marian. This is the formula for transforming our world, and when these commitments are fully in place, everything else follows. There are many ways to be a good foot soldier of Mary and the Church, but let me give you one excellent example.

On the morning of May 13th of 1981 the world waited with baited breath to see if Pope John Paul II would survive the assassination attempt on his life by a crazed Turkish gunman operating under orders from Communists. It was the feast of Our Lady of Fatima, and in gratitude for saving his life, the Holy Father went to Fatima the following year on her feast day to re-consecrate himself and his papacy to her Immaculate Heart. Something in John Paul's experience of being targeted by a murderer, surviving miraculously and re-consecrating his life to Mary is paradigmatic for all of us: it symbolizes the triumph of Mary's Immaculate Heart over the culture of death. John Paul will be known in history for his brilliant defense of the sanctity of human life and for his immense love of Mary. In fact, he showed us that consecration to Mary and dedication to life are synonymous realities.

This was borne out by what happened just hours before the assassination attempt. On the morning of the day that he was felled by Ali Agca's bullet, Pope John Paul signed two documents formalizing the Virgin Mary's counter-attack on the culture of death. That morning he established both the Pontifical Council for the Family and the John Paul II Institutes for Marriage and the Family worldwide. It is hard to imagine two works of the Church that have done more to strengthen the divine institutions of marriage and the family than these. The Council has been a bastion of pastoral defense of the family like no other for the past twenty-five years, and the JP2 Institutes have literally transformed the Church's theology of marriage by propagating and deepening John Paul's "theology of the body" throughout the entire world. Many Catholics may not be aware of the work of these institutions, but certainly the Church as a whole has benefited immensely by their apostolates.

Consecration to Mary and defense of these sacred realities are intimately connected in the Church's fight against modern errors. I can think of no other period in history where Mary's messages have been so urgent in defense of life, marriage and family. Her Immaculate Heart cannot be neutral to the devil's shock and awe campaign against God's plan for us which, as John Paul said so often, passes through the family in a very tangible way. Mary has chosen to meet us there at the crossroads of the modern conflict with the prince of evil. Her battle plan is to involve us in a heroic effort to protect life, marriage and the family at a time when it is most under attack.

In practical terms, everyone who rejects the cultural poisons of contraception, abortion, sex education, euthanasia, and the myriad attacks on everything sacred is engaging in Mary's battle. Some do battle by coming out of the murky cultural darkness and producing the fruits of conversion for all to see. Others engage the enemy by deliberately teaching the abundance of Catholic truth on these subjects to the young. Many more will infuriate the devil simply by living their marriages and family lives according to Catholic teachings. There are many ways to be Mary's foot soldiers.

We all want to make this world better, indeed to transform it into the Kingdom of God. The way to do it is to be a faithful Marian Catholic. That is the Triumph of Her Immaculate Heart - one heart at a time.