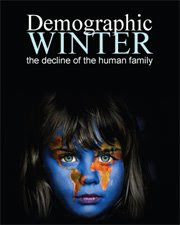 MEDIA ADVISORY, June 29 /Christian Newswire/ -- SRB Documentaries is pleased to announce the release of "Demographic Bomb: demography is destiny," the long-awaited sequel to 2008's "Demographic Winter: the decline of the human family."
Barry McLerran, producer of both documentaries, observed, "Like 'Demographic Winter,' 'The Demographic Bomb' deals with rapidly falling birth rates and their consequences for humanity in the 21st century."
Viewers of "Demographic Winter" heard from demographers, sociologists, economists and historians on the demographic crisis confronting us.
McLerran commented: "'Demographic Bomb: demography is destiny' explores the history of the modern population-control movement -- how it persuaded the public that there are too many people in the world, and how these fallacies became institutionalized."
Among those interviewed in "Demographic Bomb" is Paul Ehrlich of Stanford University, author of 1968's The Population Bomb, which popularized the myth of overpopulation.
Mathew Connelly of Columbia University (author of Fatal Misconception: The Struggle To Control World Population) reveals how organizations, institutions, governments and the United Nations manipulated and coerced families, evaded political accountability and violated basic human rights to achieve their population-reduction agenda.
Former Yale Professor of Economics Jennifer Roback Morse, USC Professor of Urban Planning and Demography Dowell Myers, Harvard PhD Nick Eberstadt, Harvard MBA, Harry Dent (author of The Great Depression Ahead) and Nobel Prize winning economist Gary Becker uncover the roots of the crisis that has shaken the world's economies.
McLerran noted: "'Demographic Winter' predicted the financial crash of 2008 to within 12 months. "Demographic Bomb" reveals how this is just the beginning."
"'Demographic Bomb' shows what happens when countries comprising 80% of the world's economy have plummeting numbers of workers, consumers and innovators - leading to falling consumer spending, and too few workers to support the elderly," McLerran disclosed.
Accredited members of the media can receive a review copy of "Demographic Bomb" by e-mailing support@demographicwinter.org or calling 508- 405-1337. Click here to view a trailer for "Demographic Bomb."
To arrange an interview with a spokesman for "Demographic Bomb: demography is destiny" and "Demographic Winter" contact Don Feder at 508- 405-1337 or dfeder@rcn.com.
Posted by Deacon John at 11:24 AM