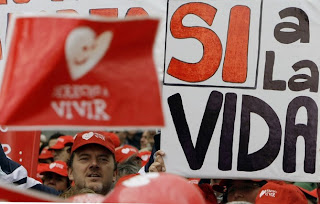 EUROPE/SPAIN - Bishops' Declaration on the Abortion Bill: "We are speaking out in favor of a society that has the right to just laws that do not mistake injustices for rights."

Madrid (Agenzia Fides) – The Permanent Commission of the Spanish Bishops' Conference (CEE) celebrated its CCXIII Meeting in Madrid, on June 16-17, dedicating a large part of the sessions to analyzing the Abortion Bill that the Cabinet publicly announced this past May 14. As a result of the reflection, they published a "Declaration on the Abortion Bill: Taking an unborn life become right." The Bishops mention that if the Bill in question becomes law, "it would imply a serious step backwards in the protection of unborn life, a greater abandonment of pregnant mothers, and therefore, very serious harm to the common good."
The worst part of the Bill, the Bishops say, "is its intent to make abortion a right to be protected by the State." In fact, during the 14 weeks of gestation established by the Bill, "the will of the mother becomes the absolute will over the life or death of the child she carries inside her." They also mention that "the right to life is not something granted by the State, but a right that precedes the the State and which the State must protect."
Health has become an excuse for eliminating the life of the unborn, but this is a great fallacy, as "aborting is never something that heals, but that kills." "An authentic healthcare policy should always take into account the health of the pregnant mother, but also the life and health of the child to be born." Moreover, "the imposition of abortion on the healthcare system as a kind of assistance for the biological, psychological, and social wellbeing of the pregnant mother, who supposedly has a right," always leaves room for the possibility that those who refuse to perform an abortion, "for reasons of conscience," are not respected.
Moreover, the Bill "devalues the human being, to try to justify their elimination," supporting "the irrational affirmation that for some period of time the living being...would not be a human."
The Bishops also denounce that fact that "this Bill does not show real interest for the good of women who are tempted to have an abortion, especially the youngest women. It only opens their way to a moral abyss and post-abortion syndrome."
"There is an injustice committed in imposing a determined sexual moral education that is not only pro-abortion and pro-gender ideology, but which is neither efficient as a true education nor as a means to preventing abortion."
The Bishops conclude their Declaration, recalling that every human being "is a sacred gift to their parents and to society as a whole," and therefore, "their life cannot remain arbitrary to anyone, much less the State, whose primary responsibility is precisely that of ensuring the rights of all to life, as a fundamental element of the common good."
"We are speaking out precisely in favor of those who have a right to be born and be loved by parents; we are speaking out on behalf of mothers, who have the right to support from society and from the State in order to avoid falling victim to abortion; we speak out in favor of freedom for parents and schools in offering their children an affective and sexual formation in accord with the moral convictions that truly prepare them to be parents and welcome the gift of life; we speak out in favor of a society that has the right to just laws that do not mistake injustices for rights," the text concluded. (RG) (Agenzia Fides 19/6/2009)