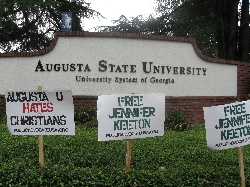 AGUSTA, Ga., Aug. 18 /Christian Newswire/ -- Agusta State University wants a student, Ms Jennifer Keaton, to undergo "Thought-Reform Remediation" but a conservative group says "stop the execution" and has rushed to the streets and roadways in response.

Photo: Signs posted by Public Advocate this week, a pro-family group, on overpasses, state highways, town roads and major cities in Georgia include these messages "Boycott Augusta U", "Free Jennifer Keeton", "Augusta U Hates Christians", "Agusta State U. Christians Beware" to protest planned "academic execution" of a Christian student who believes homosexuality is a sin.

"This is nothing but plain old reprogramming just as the North Koreans do to their people. In other words, just another form of brainwashing," says Eugene Delgaudio, Public Advocate president.

To counter this attempt to brainwash student counselors in their academic program, Public Advocate is introducing their "Counter Thought Control Squads" which place in high traffic areas public messages seen by thousands of drivers and passengers in cars at a retail level.

"Perhaps administrative overlords in the Georgia State University system will appreciate a public response that is aimed at preserving diversity that includes toleration for a strong belief in moral values. Just because they want to summarily execute a student's academic life with 'academic murder' does not mean the rest of us will be complicit by simply watching and remaining silent," said Delgaudio.

These Counter-Thought Control signs counter the edicts issued by the university to conform with "liberalism or else" and encourage alternative actions to stand firm for religious values, oppose immorality and to suggest political pressure be brought to bear on the offending educational institution.

"Public Advocate is preparing a complete range of traditional political support for the victim of anti-Christian rage exhibited by despotic administrative staff at a taxpayer supported state university, the Augusta State University in Augusta, Georgia, and other campuses, and work places," announced Eugene Delgaudio, president of Public Advocate, at a news conference in Washington, D.C. today.

Taxpayer institutions that act in an anti-religious manner need students and public support. We will aim to re-access that public support on an active basis in the locality, in the state and in the respective political capitols where taxpayer funds are used for this anti-religious persecution of devout Christians. Most fair minded Americans do not want liberals to intellectually assassinate Christians and are demanding intervention to stop them," says Public Advocate president Eugene Delgaudio.