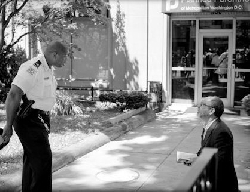 WASHINGTON, Aug. 12 /Christian Newswire/ -- The City of Washington, D.C. reverses their position and will allow prayer and free speech activities on the public sidewalk leading up to Planned Parenthood.

Photo: Pat Mahoney just prior to his arrest on June 8

For the past several months, Washington D.C. police officers have been threatening peaceful pro-life activists with arrest for simple praying and counseling on the public sidewalk in front of Planned Parenthood.

Rev. Patrick J. Mahoney, Director of the Christian Defense Coalition, was arrested on June 8 for simply praying and reading from the Bible on that public sidewalk.

However, late this week, Rev. Mahoney was told by Washington, D.C. police officials that the City had reversed their position and will allow prayer and free speech activities on the public sidewalk.

Their decision came on the eve of a project called "A Time to Stand," in which pro-life activists from around the country were coming to challenge the ban on free speech and were willing to risk arrest for public prayer.

Hundreds of activists will still gather in front of Planned Parenthood on Saturday, August 14, at 10:00 A.M. to pray, worship and counsel on the public sidewalk and embrace the First Amendment and religious freedom.

The activists would also like to thank the American Center for Law and Justice who was representing them and did an incredible job of fighting for the truth.

"We thank God for this important victory for free speech, public prayer and the First Amendment. The City of Washington, D.C. got it right when they reversed their tragic decision to arrest American citizens for simply praying on a public sidewalk.

"It would have been unthinkable for our nation's capital to ban and prohibit prayer on a public sidewalk, just blocks from the White House, to protect abortion and Planned Parenthood.

"There is a word of caution however. If we did not stand for our rights and go to jail; if we did not mount an aggressive legal effort and if we did not invite people do come from around the country to pray on the public sidewalk even under the threat of arrest, that sidewalk would still be closed to the First Amendment.

"This struggle reminds us all of the famous quote from Thomas Jefferson in which he said, 'Eternal Vigilance is the price of liberty.' We must recognize that our rights, freedoms and liberties must be constantly defended.

"Finally, this episode shows the lack of integrity and commitment that Planned Parenthood has to the First Amendment and the truth. They constantly lied about the nature of that sidewalk saying it was 'private' when they knew it was public. It should remind every American if an organization has no respect for the dignity and sanctity of life why would they respect the dignity of free speech?"