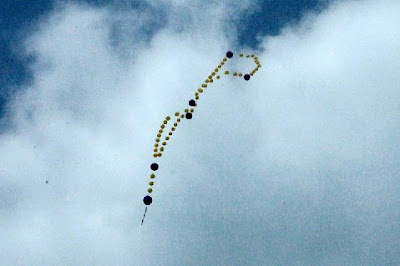 Giant LIFE Balloon Rosary seen by Thousands over Chicago.  Downtown CHICAGO (August 15, 2011)
Just in time for the Feast of the Assumption of Our Lady, a 75-foot rosary floats skyward from Chicago's Michigan Avenue Bridge claiming the Magnificent Mile for Mary.

A giant rosary floated gracefully over Chicago's  busy tourism district on Friday as thousands looked on. The six-foot gold cross hanging from the rosary sparkled in the sunlight as it very slowly ascended between the Tribune tower and the Wrigley building. The rosary of helium-filled yellow balloons bearing the word LIFE then floated down Michigan Avenue over the Hancock Tower and past North Ave Beach.  Cameras and cell phones flew into action as people responded to the unexpected sight.

"There was an excitement all around us and there were people in tears at the sight of the rosary. I think we often take it for granted the power of a simple witness to the faith," said a camp counselor. A passerby tweeted, "A balloon rosary in the air. My faith confirmed :)", while another surprised Chicagoan wrote, "what the... giant balloon rosary, with cross, just floated heavenward from the Michigan Avenue bridge."

Parish. The girls prayed the rosary in front of the Washington Blvd. Family Planning Associates asking Our Lady for an end to abortion. They then carried the rosary, cross-first, through downtown Chicago 's peak traffic to the cheers, and sometimes jeers, of pedestrians and motorists. Homeless people gave high fives, street preachers started singing Gospel songs, and semi-truck drivers shook the streets sounding their truck horns in approval. "I was completely ecstatic the whole time. I loved seeing how many people on a random street corner were thrilled. It is a lot more than we tend to think," said one participant.

One of the girls said, "It was the prettiest rosary I have ever seen. I liked how it would float up and sit and then float up and sit. It looked really pretty against the buildings and the sky." Another camper said, "The best way to describe it was 'beautiful'. I didn't see one frowning face. It evangelized everyone who saw it."

This is the latest of a series of spontaneous acts of joy across the United States involving the yellow LIFE balloons. Sightings of LIFE balloons at prayer vigils, county fairs and flash mobs leave many wondering if the trend will impact this year's March for Life in Washington DC .
See photo post here: https://picasaweb.google.com/104310456403281787387/GiantLIFEBalloonRosarySeenByThousandsOverChicagoSDowntown
Story by Nathan Joel, Photos by Rebekah Smith.

Email ThisBlogThis!Share to TwitterShare to Facebook
Posted by Ed Sousa, Sr. at http://ingodscompany2.blogspot.com/2011/11/giant-life-balloon-rosary-seen-by.html
Posted by Deacon John at 4:54 PM