Egypt: Kidnappings of Coptic girls on the rise - Vatican Insider

Egypt: Kidnappings of Coptic girls on the rise - Vatican Insider 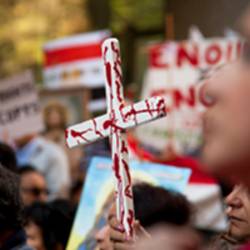 Marco Tosatti Rome As Egypt’s president Mursi hands Salafist and Al Jamaa Al Islamiya Islamists power over seven out of seventeen governorates, boosting the power of Muslim fundamentalists in the country, the problem of Coptic girls going missing remains. It is likely the girls are being kidnapped by Islamic fundamentalists and forced to marry.

The Association of Victims of Abduction and Forced Disappearance (AVAFD) gives these victims a voice. Since the fall of Mubarak’s regime, disappearance cases seem to have become more serious.

The association’s founder, Ibraam Lewis, stated: “The association has filed 45 complaints with the Prosecutor General and a memorandum to the military junta during its rule of the transition period, in addition to memorandums to most of the ministers of interior.” It has also organised a series of meetings - notably “with Hossam Ghiryani, president of the National Council for Human Rights, a number of the council's members, and a number of members of the Shura Council” - to raise awareness about the problem.

Lewis presented some shocking figures: the association has registered about 500 cases of Coptic girls being abducted after the revolution. "The Association has agreed to organize a meeting with the girl returned after kidnapping in one of the provinces of Upper Egypt and the French journalist talked with her about the abduction period, which lasted for 60 days. He saw the removal of the cross from her hand," Lewis added.

Although the phenomenon of young women being kidnapped and forced to convert to Islam is quite widespread in Egypt, particularly since the rise of political Islam to power, the case of a 14 year old girl named Sarah, has sparked an outrage. Sarah Ishaq Abdelmalek was on her way to school with her cousin Miriam last 30 September in el-Dabaa, when they stopped by a book store. Miriam left Sarah in the store and she has not been seen since. Her father reported her disappearance to the police and received a phone call straight afterwards, telling him he would never see his daughter again.

Bishop Anba Pachomius instructed Fr. Bigem, the local church supervisor, to send an appeal to President Mursi, informing him of the kidnapping and pointing the finger at Mahomoud Selim Abdel Gawad, the owner of a book store near Sarah’s school. Abdel Gawad is a local Salafist leader. “The police know where the little girl is and have promised to solve the case, but this is just talk," said Fr. Bigem.