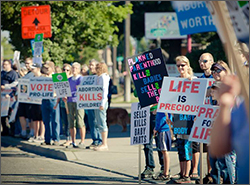 (October 10, 2016 – Chicago) The weekend of Saturday, October 15, 2016, Planned Parenthood will celebrate its 100th year. Meanwhile, the pro-life community will pray and solemnly mark the millions of children that Planned Parenthood has aborted. Pro-Life Action League, along with Created Equal and Citizens for a Pro-Life Society, are coordinating #ProtestPP prayer events across the nation.  These events will take place at nearly 120 Planned Parenthood locations across the country.
In October 1916, birth control activist and sex educator Margaret Sanger founded the organization that would later be renamed the Planned Parenthood Federation of America. In 1970, the first Planned Parenthood abortion was performed. In the intervening years, Planned Parenthood has become the nation’s largest abortion chain and the foremost advocate of abortion on demand. To date, Planned Parenthood has provided roughly 7.3 million abortions, currently adding over 320,000 that total every year, cornering nearly one third of the U.S. abortion market.
During this same period, the pro-life movement has grown from a handful of groups to hundreds of national, state and local organizations. As Planned Parenthood’s market share of the abortion business has grown, these groups have increasingly focused their attention on Planned Parenthood facilities. Their protests, prayer campaigns, legislative efforts and investigations of wrongdoing have led to the closures of dozens of them—including recently the Planned Parenthood offices in Augusta, Georgia, and Pueblo, Colorado.
While the pro-life groups organizing the October 15 campaign cannot match the $500 million annual taxpayer subsidy to Planned Parenthood as it turns 100, #ProtestPP can continue to confront America’s largest abortion provider with prayer. Candlelight vigils and solemn “Jericho Marches” are scheduled at over 100 Planned Parenthood facilities throughout the United States. According to event organizers, a “Jericho March” mimics the biblical battle of Jericho, during which God instructed Joshua to lead the Israelite army in a march around Jericho. On the seventh day, the city walls of Jericho crumbled.
Eric Scheidler, Executive Director of the Pro-Life Action League, explained that while no one expects Planned Parenthood buildings to collapse, participants will pray for hardened hearts to crumble, recognize the evil of abortion and condemn Planned Parenthood’s role in promoting it.  He noted the significance of the abortion giant’s anniversary, “This month Planned Parenthood turns 100. That’s 100 years of preying on our families, polluting our culture, and, since 1970, killing our children by the millions. As they hold big fundraisers to celebrate this shameful milestone, those who value human life will unite to pray for an end to this organization that has done so much to destroy American families.”
Details on #ProtestPP prayer events candlelight vigils, and “Jericho March” locations across America are available at http://protestpp.com/locations/.
About the Pro-Life Action League
The Pro-Life Action League was founded by Joe Scheidler in 1980 with the aim of saving babies from abortion through direct action, and is now headed by Joe’s son Eric. Not content to await a political or judicial solution to abortion, the League seeks to stop the killing of unborn children right now through all available peaceful means, including public protest, sidewalk counseling, education, youth outreach, and national leadership. Visit www.prolifeaction.org to learn more.
Posted by Deacon John at 1:54 PM