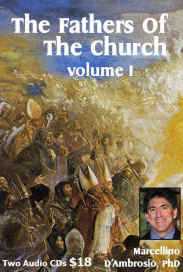 a) From the time the Christian Church emerged in the Mediterranean world in the first century A.D., opposition to abortion had been one of its moral tenets. A First Century catechism, The Twelve Apostles, placed those who are "killers of the child, who abort the mold of God," between murderers and adulterers, all embarked on "the Way of Darkness." The easily Christian Epistle of Barnabas 19:5, see Doctrina duodecom apostolorum; Barnabae epistual, Ed. Theodor Klauser (Bonn, 1940).

c) The Didache, written in the second century, contains this instruction to Christians: "Loving what is worthless, pursuing payment, merciless to the poor, not caring for the deprived, forgetful of Him who made them, murderers of children, corrupter/destroyers of what God has formed, refusers of the needy, oppressors of the afflicted, defenders of the rich, wicked judges of those who have not; sinners without faith and law! My children, keep far from all that!" (Didache, v.2).

d) Among the early church writers, Caesarius of Arles wrote, "No woman should take any drug to procure an abortion, because we will be placed before the judgment seat of Christ, whether she has killed an already born child or a conceived one" (Sermons i, 12).

Tertullian's Apology, written in his orthodox period, says: "for us, since homicide is forbidden, it is not even permitted while the blood is being formed into a man to dissolve the conception in the uterus. For to prevent its being born is an acceleration of homicide, and there is no difference whether one snuffs out a life already born or disturbs one that is in the process of being born. For he also is a man who is about to be one, just as every fruit already exists in the seed" (ix. 8).

g) Basil the Great, one of the greatest eastern Christian Fathers, writes: "Whoever purposely destroys a fetus incurs the penalty of murder. we do not ask precisely whether it is formed or not formed. For here not only that which have been born is vindicated, but also the woman herself who prepared her own destruction since oftentime women die in such attempts. But to this the fetus destroyed adds another killing" (Ep. 138; P.G., xxxii, 672, 677).

h) The second century Pedagogus, by Clement of Alexandria, teaches: "But our whole life would proceed in keeping with nature, if we would but control our desires at the outset and refrain from taking away by oils and vicious techniques the human progeny born by the providence of God. For those women who conceal sexual wantonness by taking stimulating drugs to bring on an abortion wholly lose their own humanity along with the fetus" (Pedagogus, ii. 10:95-96).
[To be continued]
Posted by Deacon John at 11:13 AM