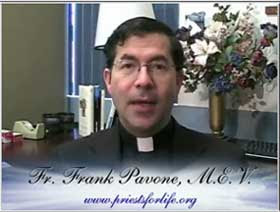 If we think of hell, we might imagine screams coming out of the flames, or the sinister laughter of the devil. But the sound I recently heard coming from there was that of applause.

What I heard was an audiotape of Dr. Martin Haskell giving a presentation at the 16th Annual Meeting of the National Abortion Federation Conference in 1992 in San Diego. It was a gathering of abortionists -- men and women who make their living by killing babies. Haskell was describing to his audience how to do a partial-birth abortion. Listen to his words about how this procedure takes place:

Haskell, having described these brutal details, shows his audience a video of himself doing one of these procedures. And at the end of the video, after the sound of the suction machine taking the brains out of the baby's head, the audience applauds.

That, my friends, is applause from hell.

We often speak about "the fires of hell." It is also true, however, to say that hell is very cold. It is the absence of all conscience, of all pity, of all love. That kind of hell is reflected on earth when a group of human beings can sit around a video machine, watch someone deliberately kill a baby, and then applaud. That's the heart and soul of the abortion industry. That's the heart and soul of "pro-choice."

It's the same chilling attitude of which Dr. Bernard Nathanson repented. He writes about how he felt after he killed his own child by abortion. "I swear to you that I had no feelings aside from the sense of accomplishment, the pride of expertise. On inspecting the contents of the bag I felt only the satisfaction of knowing that I had done a thorough job" (The Hand of God, p.60).

I am convinced that the first and overall most effective way to fight abortion is to expose it. People need to hear descriptions of the procedure, see what it looks like, and get a glimpse into the utter corruption of the abortion industry. Saint Paul tells the Ephesians, "Have nothing to do with the fruitless deeds of darkness, but rather expose them" (Eph. 5:11). Let's put Paul's words into practice and spread the information in this column!