Sons of Adam to support men touched by abortion 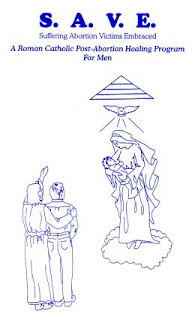 Attention Nashville, Tenn. area men who have been touched by abortion. Here is some help for your sufferings:

The focus of nearly every discussion of abortion is on the woman or her unborn child. Often hidden in the abortion issue is its impact on the man.

“There is always a father,” said Father Steve Wolf, pastor of St. Stephen Catholic Community in Old Hickory. “Their role or lack of role in the decision can create a stream of consequences that may accompany the man through the rest of his life.”

Father Wolf is starting a discussion group called Sons of Adam for men who are suffering from an experience of abortion.

“Because men are told they have no say in the abortion decision – that it is about a woman and her choice – they later struggle with the questions they pose to themselves and the emotions they feel,” Father Wolf said.

Those emotions may take numerous forms, including rage, a sense of impotence, or grief over the loss of fatherhood, he explained. Some men react self-destructively, by turning to alcohol, drugs, or other risk-taking behaviors. Others experience nightmares and suicidal thoughts.

Father Wolf hopes talking about their experience with abortion will help men avoid such problems.

But he won’t be surprised if, at first, men find it difficult to open up about such a personal issue. However, Father Wolf is confident the group setting will encourage an atmosphere of sharing.

“We take to confession those one or two or three things that really bug us,” said Father Wolf. “Men who can be helped by a process like this know who they are. When the topic is something that really matters to a man, he will speak up. He might not do so the first week, and that’s OK. We have a need to tell some of our own story, but sometimes a man can find healing in hearing the stories of others.”

The idea for the men’s group stemmed from a suggestion by a facilitator of a similar group for women at the Hope Clinic for Women. Father Wolf had also had some experience talking to men and women privately about abortion choices during the Sacrament of Reconciliation and spiritual direction. When the concept was presented, he spent some time researching the topic.

“I found a great book, ‘Men and Abortion,’ by Catherine Coyle, but it wasn’t in a format that I felt I could use in a group setting,” said Father Wolf. “I also found a wonderful post-abortion bible study for men, “Healing a Father’s Heart” by Linda Cochrane and Kathy Jones. But it didn’t fit a more Catholic process of healing by way of faith sharing, with which I became familiar from leading Kaleidoscope grief support groups while in the seminary.”

Instead, Father Wolf sought permission to assimilate readings from both of these books into a Sons of Adam workbook, which will be used to augment the discussions during the group meetings.

“Men are asked to do a little reading beforehand,” said Father Wolf. “If that doesn’t happen, it will still work fine. We will pray some Scripture together, read a story from Catherine Coyle’s book, review some things for the men to think about, spend some time with a couple of reflection questions, and conclude with a prayer.”

Choosing the Biblical moniker for the group was intentional. “The name Sons of Adam comes from reflection on Abel, whose sacrifice was pleasing to God, on Cain, who did violence to his own brother, and Seth, in whom God renews the goodness of life,” explained Father Wolf. “There’s a little of the innocent trust of Abel, the fear and rejection of Cain, and the desire to be generative of Seth in every man.”

The meetings will take place in a confidential location near St. Stephen Church, but not on the church property itself.

“No one, neither men nor women, want anyone to know about their experience of abortion,” said Father Wolf. “This is one of those things that many or most people have not even told their best friends, sometimes not even their spouses. It has to be at a safe place.”

However this difficult topic is confronted, one on one, in a group setting, or in one’s private reflection with suggested readings, Father Wolf hopes a conversation about the consequences of abortion will help people consider other options.

“I would also hope,” said Father Wolf, “that even awareness of this ministry might help young men and women who are considering an abortion to take a breath and consider all of the long-term ramifications.”

The first Sons of Adam group will meet at noon on Thursday, March 15. Subsequent Thursday noon meetings are scheduled for March 22 and 29, April 5, 19 and 26, and May 3, 10, 24, and 31. There is no charge for any of the group sessions, but interested participants are expected to attend most of the meetings.

To sign up for the group or to leave a message, contact Father Wolf at 615-758-2424, ext. 12, or by e-mail at sonsofadam@idjc.info. Those who wish to meet with Father Wolf but not join the group will also be provided with the Sons of Adam materials.