Vatican to UN: "First Right of Children is that of Being Born" 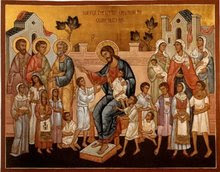 GENEVA, March 27, 2007 (LifeSiteNews.com) - "The first right of children is that of being born and educated in a welcoming and secure family environment where their physical, psychological and spiritual growth is guaranteed, their potential is developed and where the awareness of personal dignity becomes the base for relating to others and for confronting the future." The statement was made during a March 23 address by Archbishop Silvano M. Tomasi C.S., Holy See (Vatican) permanent observer to the United Nations at Geneva, who spoke during the 4th session of the Human Rights Council.

Archbishop Tomasi recalled that "the United Nations Convention on the Rights of the Child attributes to the child the fundamental rights of a person; it recognizes the child to have the same equality and dignity as any adult person."

"In many cases," he went on, "due to lack of will and of resources, good legal provisions and public policies are not implemented, with grave consequences for children. They often become the first victims of famines and wars."

"To many children the right to life is denied; prenatal selection eliminates both babies suspected of having disabilities and female children simply because of their sex, and thus denies the equal and intrinsic value of disabled persons and of girls for their families and for society."

State and society, said the permanent observer, must "concretely support and enable the family to carry out its task. ... The Catholic Church's over 300,000 social, caring and educational institutions work daily to ensure both a peace-oriented and creative education for children, and the development of their talents, and to provide the reintegration of abused and neglected children into their families, if possible, and into society."

"Children are both weakness and hope. To pursue the defence of their rights and the elimination of all forms of violence against them remains an institutional challenge for the international community. Success will be reached if priority is given to the natural role of the family and to the public culture that recognizes that children too are full human persons."

(with files from Vatican Information Service)