LEGAL RIGHTS OF THE UNBORN 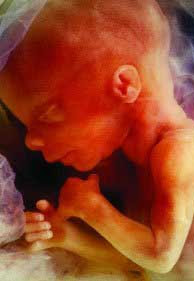 Continued . . .
V. American courts have continuously held the rights of the unborn as superior to those of the mother's wishes.

(1) We are satisfied that the unborn child is entitled to the law's protection and that an appropriate order should be made to unsure such transfusions to the mother in the event that they are necessary in the opinion of the physician in charge at the time. Raleight Fitkin-Paul Memorial Hospital v. Anderson (1964)

(3) . . . the unborn child in the path of an automobile is as much a person in the street as the mother.
(Does such a child become less a person when, instead of an automobile a physicians' forceps, curettage or suction machine is directed to his destruction?) Prosser on Torts, 3d Edition, 1964, Sec. 56
[to be continued . . .]