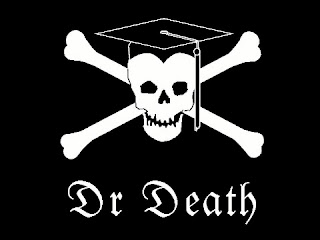 He's back, and going to college!

July 17, 2007 (LifeSiteNews.com) - ACCENT, the University of Florida student government funded speaker's bureau has confirmed that Dr. Jack Kevorkian has accepted a $50,000 speaking engagement at the University.

LifeSiteNews.com spoke with ACCENT chairman Steven Blank today, who said that while he could confirm that Dr. Kevorkian has accepted the invitation, and is scheduled to speak on October 11, as of yet further details cannot be released.

"We figure that this will be a great way to engage our student body and entertain," said Blank about Kevorkian's upcoming appearance. "We do understand that this will spark controversy. And that is something we have done in the past."

Dr. Jack Kevorkian, the infamous euthanasia doctor who assisted up to 130 people to commit suicide, was released from prison earlier this year for "good behavior" after serving only 8 years of a 10-25 year sentence for second-degree murder in the televised death of Thomas Youk.

While ACCENT would not confirm the exact topic of Kevorkian's speech, it will almost certainly center around Kevorkian's assisted suicide advocacy. Shortly after being released from prison, the infamous doctor-become-celebrity declared his intention to continue advocating for assisted suicide on demand, although he claimed that he would not actively participate in an illegal assisted suicide himself, but would work through the legal system.

When asked whether or not ACCENT was concerned about giving a public platform to a convicted murderer, Blank said that ACCENT was not necessarily advocating Kevorkian's opinions: "We pride ourselves on being non-partisan. We try not to take any one point of view."

"We aren't bringing him in to try to convince people of his views but to engage the student body and they can choose for themselves," said Blank. He also said that ACCENT believed that by adding Kevorkian to the roster of speakers, they would be adding a positive "diversity" to the speaker lineup. Blank, however, would not directly respond to a question about whether or not ACCENT would invite a racist speaker to speak to increase "diversity", responding that, "Each speaker is taken on a case by case basis."

While Kevorkian has been portrayed by the media as an advocate for assisted suicide for the terminally ill, his writings reveal his interest in legalized assisted suicide and euthanasia available upon request, for people with such varying problems as "intense anxiety or psychic torture" and those who want suicide for "religious or philosophical tenets or inflexible personal convictions."

One person who was especially disturbed by the information that Kevorkian was being paid a hefty sum to speak to University students is the brother of Terri Schiavo, Bobby Schindler. While in prison Kevorkian had stated in an interview that he would have killed Terri Schiavo, had her husband asked him to.

In that interview, the interviewee asked Kevorkian about Terri Schiavo's death by starvation and dehydration: "Do you think after watching it that America has sort of changed its mood toward what you did?" Kevorkian responded, "If they're rational, I think they would." He continued by saying that he would have killed Terri had his husband asked him earlier. "After all that long period of time in a coma, I think she would qualify," he said.

Bobby Schindler, who had worked tirelessly to protect his sister from a painful death by dehydration and starvation, is calling on people to sign a petition to stop Kevorkian's appearance at the University of Florida. (see http://tool.donation-net.net/entrance/enter.cfm?dn=1068&source=2000&id=14905&amp;commid=540762&CFID=3432823&CFTOKEN=30764289)

"He's [Kevorkian] targeting our college kids, and I find it very troubling," Schindler told LifeSiteNews. "We're sending this message to our young kids that the answer to human suffering and the chronically ill is to kill, and it's extremely dangerous and troubling."

Schindler also criticized ACCENT for claiming to simply be presenting the issue for consideration, and not taking any sides. "How can that be if they're only getting one side of the issue? That's ridiculous. That's illogical .They're not having someone speaking on compassion, and why assisted suicide is potentially destructive. They're only going to have him speak. I don't see how the students are going to choose if they're only going to hear one side of the argument."