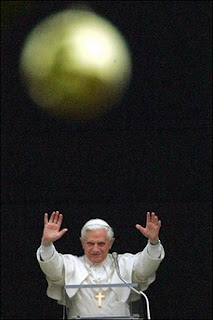 VATICAN CITY, July 5, 2007 (LifeSiteNews.com) - In an address to bishops from the Conference of the Dominican Episcopate today, Pope Benedict XVI emphasized the vital role of the family as one of the "fundamental objectives of new evangelization".

In the Dominican Republic, the Pope noted, there are evident "symptoms of a process of secularization in which, for many people, God does not represent the source, the goal, or the ultimate meaning of life." Despite this fact, he added, "this people has a profoundly Christian soul."

He stated, "Another of the fundamental objectives of new evangelization is the family." The Church supports the family against "the great challenges they have to face," and "encourages them in their faith, safeguarding their perseverance in a Christian project for life, often subject to so many vicissitudes and dangers."

He next indicated how the Church strives to help the family maintain its true spirit and integrity, ensuring that "the family remains a real environment in which a person is born, grows up and is educated for life, and in which parents, in their tender love for their children, prepare them for healthy interpersonal relationships that incarnate human and moral values in the midst of a society so marked by hedonism and religious indifference."

In addition, state authorities need to "collaborate still more in the indispensable task of working in favor of families." The Pope then specifically noted "the difficulties facing the institution of the family in the country, especially with the drama of divorce and pressures to legalize abortion, as well as the spread of unions not in accordance with the Creator's design for marriage." The Dominican Republic has maintained (like most of Latin America) strict laws regarding abortion and same-sex "marriage". Only last year, for example, parliament refused to adopt a bill that would have allowed abortion in the case of rape. The Dominican Republic also joined other countries worldwide in recognizing March 25 as the Official Day for the Unborn, saying that it is "appropriate and necessary to assign a day to the unborn child, for the purpose of encouraging reflection on the important role of a pregnant woman in the destiny of humanity, and the value of the human life she carries in her womb." The Catholic Church has strongly resisted anti-family and anti-life pressure on the country. In 2002 Santo Domingo hosted a gathering of bishops from 25 Central and South American countries who condemned the UN and EU for attempting to pressure Latin America into accepting abortion, homosexuality and divorce (see http://www.lifesite.net/ldn/2002/sep/02090503.html ). (with files from the Vatican Information Service) Read related LifeSiteNews.com coverage: Dominican Republic Refuses to Legalize Abortion for Rape Victims http://www.lifesite.net/ldn/2006/jul/06072704.html More and More Countries Declare 'Day of the Unborn' http://www.lifesite.net/ldn/2003/mar/03032609.html Santo Domingo Cardinal Says no Gays in Seminaries http://www.lifesite.net/ldn/2005/mar/05030109.html -- "In Cordibus Jesu et Mariae"
Posted by Deacon John at 8:28 PM