Dear Deacon John,
Happy Monday! As the work week begins, here are some nuggets of good news to show you what God is doing in response to your prayer and fasting.
So far during this campaign, our local leaders report that …
… 121 babies have been saved from abortion (that we know of)!
That may seem like just a number. But each number represents a living human being, each of whom is now part of a story about the impact of prayer …. and God’s inspiration.
Pomona, California 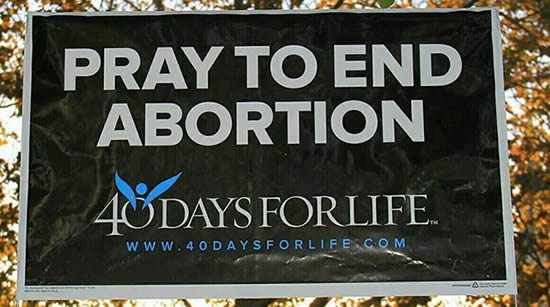 A woman walked up to a couple of the people praying outside the Planned Parenthood abortion center and told an amazing story. “I just want to tell you that what you’re doing is not in vain,” she said.
The 40 Days for Life vigil was in progress when she arrived for her abortion appointment. She’s married and has five children – the youngest is a one-year-old. Her husband was totally against the abortion … but she refused to consider calling it off. He eventually gave in … and accompanied her to Planned Parenthood.
She went on to tell the volunteers that she was being prepped for the abortion … and the staff had already started an IV. It was at that moment she decided she could not go through with it!
“When the couple was leaving, the husband was all smiles and waving,” said one of the vigil leaders. “What an uplifting story! Praise the Lord!”
Philadelphia, Pennsylvania 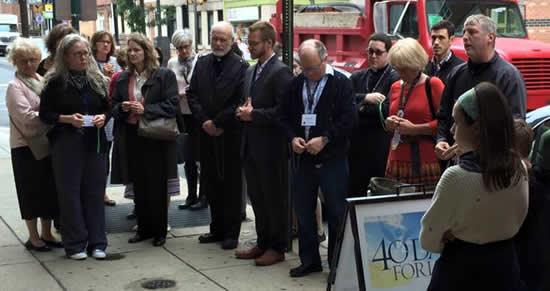 Volunteers in Philadelphia called it “a blessing in a blizzard.” Well, it wasn’t so much a blizzard as it was an unexpected snowfall in the early morning hours. But it was enough to delay a young woman on her way to the abortion center.
Vigil participants, a pastor and a friend had encouraged her to reject abortion. But she got up that morning and headed to the appointment.
With the snow covering the roads, however, traffic was at a standstill. “That pause gave her a chance to digest and choose to turn around and return home,” Monique, the local leader, said. “That was when she decided to keep the baby.”
She said it was an example of “divine intervention in this crazy, out-of-the-blue, one-hour, completely unexpected snowstorm. And that beautiful girl and her child have been so blessed! Thank you for your prayers, my friends. Every single moment of prayer makes such a difference!”
Charleston, South Carolina

One of the counselors outside the abortion facility was able to catch a young woman as she and a companion were driving out.
The volunteer asked them to pull across the street – first of all, they didn’t want to block the driveway. But they also wanted to avoid the abortion center’s staff member, who started yelling at them.
The woman said she was advised to have an abortion because of medical issues. The counselor listened with concern, but also told her about life-affirming medical assistance that could help her and her baby through the pregnancy.
That eased her mind considerably, as she was both relieved and excited to receive the information.
“All glory to God!” said one of the Charleston team members. “Another precious baby’s life was saved!”
Here's today's devotional from Randolph Sly of the National Pro-life Religious Council.
Day 13 intention For all fathers who are terrified of being fathers.
Scripture A father of the fatherless, a defender of widows, is God in His holy habitation. — Psalm 68:5
Reflection from Randolph Sly I had a friend many years ago who confided in me that he was terrified of being a father. He and his wife already had two children when this revelation came forth. "I never knew my father," he explained, "and I have no idea what a father is supposed to do." We continued to share about this, as well as pray together. He began to see he had a father's heart for his children. His biggest problem was not a limitation on love but not knowing how to act out this love. One day we talked about the verse quoted at the top of this page. I shared that he did know his Father... not his biological father but his Heavenly Father, who had rescued him from a life of destruction not many years before. "How did your Heavenly Father guide you?" I asked. He talked about the ways he had seen God's love offered to him and the way the Lord had used circumstances and the Scriptures to mold him and mature him. "Well, the Lord wants to do the same thing through you for your children. Be available to His love and available to your kids. You'll do fine." How wonderful it is to know that God takes a personal interest in each of us, many times using His faithful people -- the Church -- as channels of this love. No one is fatherless who lives in the Lord. His fatherly care begins at the moment of our conception, as it is written, "you knit me together in my mother's womb" (Psalm 139:12), and continues to be poured upon us throughout our lives.
Prayer Heavenly Father, we thank you for caring about each of us so deeply. Help us to see and know you as our Father in heaven each and every day of our lives. Your loving hand also rests on every child today carried in its mother's womb. May they be born into this world and come to know fully and personally your endless love. We ask this through Jesus Christ our Lord, Amen.
Printable devotional To download today's devotional as a formatted, printable PDF to share with friends: http://40daysforlife.com/media/day13.pdf
For life,
Posted by Deacon John at 11:10 AM