Dear Deacon John,
It’s no secret that spiritual warfare can go on outside an abortion facility. Sometimes, it can be pretty obvious. But at other times, it can be a more subtle distraction.
It can often come in the form of a quick shout from a passing driver. “Get a life!” and “Get a job!” and “Do something useful!” are commonly heard.
Of course, you are doing something useful.
So don’t worry about it! Just smile, brush it off … and keep on praying!
Manchester, New Hampshire 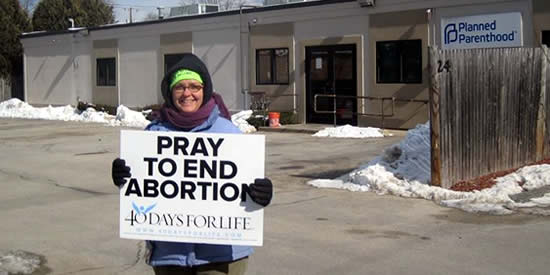 It was five below zero and windy as the two volunteers prayed in front of Planned Parenthood. The peaceful mood was broken when a woman slowed down her car, rolled down the window, and shouted, “Don’t you have something better to do?”
“We didn’t have to think twice about the answer,” said Stephen in Manchester.
“During the first two weeks of our campaign, two mothers and their children have already been saved, and we have no idea how many hearts have been changed through our daily prayer and witness,” he said. “We don’t have something better to do.”
The mothers, babies and abortion workers all need your prayers, he said. “Can you please donate some of your time … and peacefully pray in front of Planned Parenthood?
Orlando, Florida

One of the counselors in front of Planned Parenthood was able to strike up a conversation with a young woman who accepted information about community resources.
The volunteer offered to take her to the pregnancy help center, but she said her mother could give her a ride. But first, she was going into Planned Parenthood.
As she turned to go in, the counselor suggested that she hide the list of resources she was given. Other women had reported that the center’s staff had yanked the paper from their hands, while telling them they didn’t need it.
The young woman’s mom tried her best to ignore the vigil participants. After quite some time, she went inside to get her daughter. When they came out, the daughter told the volunteers they were headed to the pregnancy help center – and that she was keeping her baby.
Mexico City, Mexico 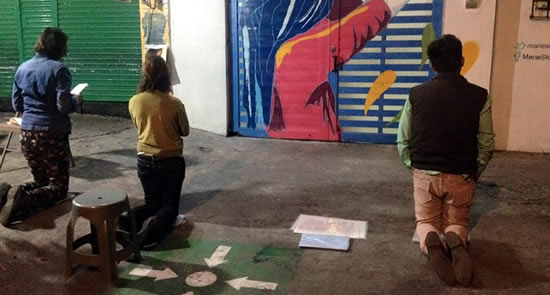 The campaign in Mexico City’s Roma area began with a group of more than 50 … and strong encouragement from a local pastor that they work as missionaries of the Gospel of Life.
Lourdes, the Mexico City leader, said that in spite of cooler-than-usual weather, they continue to stand in front of the Marie Stopes abortion center, “praying and showing the mercy of God.”
The volunteers have seen a number of couples arrive … stop for a time right in front of the abortion business … and leave. “We hope those will be lives saved from abortion,” she said.
Media reports are accusing the vigil participants of harassment … which of course is simply not true. Lourdes said it is obvious that the pro-abortion side does not want them outside Marie Stopes. “They know prayer is powerful.”
Here's today's devotional from Randolph Sly of the National Pro-life Religious Council.
Day 18 intention We pray for a flowering of the joy of parenthood.
Scripture Behold, children are a heritage from the Lord, the fruit of the womb is a reward. Like arrows in the hand of a warrior, so are the children of one's youth. Happy is the man who has his quiver full of them; they shall not be ashamed, but shall speak with their enemies in the gate. — Psalm 127:3-5
Reflection from Randolph Sly I still vividly remember the day my first child was born. As she came into the world I gazed upon the most beautiful little baby I'd ever seen. Later I was driving home from the hospital for a shower and a fresh change of clothes when a song came on the radio, "The Men in My Little Girl's Life" -- a ballad about being a father as he watches his daughter grow through childhood to womanhood. I wept as I listened, knowing those years would go by very fast... and they did. Being a father, whenever I read the Psalm quoted above I'm always captivated by one word - "heritage." It basically means "something passed down from a preceding generation." That little girl I watched being born and wept for is not mine to give to God like a product of our fertility, but rather His, which he has entrusted to us. So are all her siblings. My wife and I share a great treasure: precious lives, which are placed in our lineage that His life with us might be perpetuated. To the psalmist, this was a blessing from the Lawgiver, God Himself, who blessed Israel with another generation intended to continue their covenantal promise. For us in Christ, it is his gift of succeeding generations for His Church and her families. These days I'm looking upon my grandchildren, and rejoicing that my children and their spouses will pass on the greatness of Christ's gospel to them and thus will continue the work of God in the world. What a blessing. What a heritage!
Prayer   Heavenly Father, please keep me from taking for granted the gift of children. Help us to remember this heritage that you have given us. Make us faithful stewards of these precious lives, that each generation might be raised in the nurture and admonition of the Lord. We ask this through Jesus Christ our Lord, Amen.
Printable devotional To download today's devotional as a formatted, printable PDF to share with friends: http://40daysforlife.com/media/day18.pdf
For life,
Posted by Deacon John at 12:35 PM