From 40 Days For Life: DAY 4: Younger and younger

Dear Deacon John,
A few years ago, the president of NARAL (the largest abortion advocacy group) was shocked and discouraged to see so many young people at the March for Life in Washington DC.
When she later resigned her position, she noted her inability to get young people involved in the “pro-choice” movement.
It’s safe to say the opposite is true for the pro-life movement. I’m 33 years old ... and I often feel old at pro-life events and 40 Days for Life vigils!
Young people are not just part of the pro-life movement – they are often the majority. And they’re anything but passive about their pro-life stance.
School groups, church groups, families with small children – those are all frequent sights at the peaceful vigils outside abortion centers.
It’s not just the participants who are on the younger end of the scale – it’s often the leaders! Here’s an example of the young leader of one 40 Days for Life campaign who’s already a veteran.
Lansing, Michigan 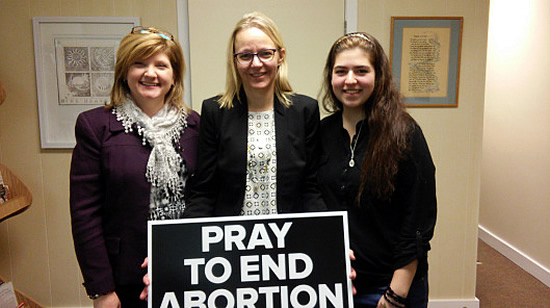 Mary Tombelli is an 18-year-old student in the Lansing area ... and she says her decision to become the next 40 Days for Life campaign director came after spending 13 hours stuck in blizzard and log jam on the Pennsylvania Turnpike.
On her return from the March for Life in Washington, DC, last month, she spent the time in prayer … and was moved to get out of her comfort zone and take a bigger role in the pro-life movement.
“I’d like to encourage the young people of my generation to take a stand for life. I hope to do this by leading this campaign asking God to help us save women, men and children from the pain of abortion,” she said. “Through God’s grace and peaceful prayer, I believe each one of us can make a difference, and support the culture of life.”
Mary also serves as the leader of the Homeschoolers for Life group in Lansing.
San Luis Obispo, California 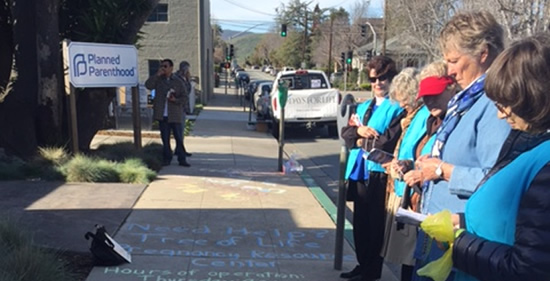 Volunteers in San Luis Obispo had extra reasons to pray more fervently outside Planned Parenthood this past week – it was one of the facility’s designated surgical abortion days.
As they prayed, they watched a young couple pull into an empty parking space near the corner. They sat in the car for a while, but then got out and continued talking as they stood next to the vehicle.
After a bit more discussion, they hugged … got back into the car … and drove away!
The volunteers are sure hopeful that their prayers were answered.
What is certain is that a young couple arrived at Planned Parenthood on an abortion day … but they didn’t stay. And that parking space was soon empty once again.
Bedford Heights, Ohio
Three volunteers were praying outside the Planned Parenthood facility in Bedford Heights, just before lunchtime. They’d been praying – and offering life-affirming information – for about an hour when two women stopped their car as they were leaving the parking lot.
One of the women looked at the vigil participants … smiled … and told them, “I’m keeping my baby!”
The volunteers offered additional details about the community organizations that would be available to assist her during and after her pregnancy. With that … the two joyful women drove away.
Today’s devotional is from Randolph Sly of the National Pro-life Religious Council.
Day 4 intention May the mystery of the Incarnation increase our zeal for defending life. Scripture Then the angel said to her, “Do not be afraid, Mary, for you have found favor with God. And behold, you will conceive in your womb and bring forth a Son, and shall call His name Jesus. He will be great, and will be called the Son of the Highest; and the Lord God will give Him the throne of His father David. And He will reign over the house of Jacob forever, and of His kingdom there will be no end.” — Luke 1:30-33 Reflection by Randolph Sly
“God has assumed Humanity, joining it with Divinity, and kindled in men's hearts new love of me.” These words were written by a Roman poet in the Fourth Century. He spent his life finding ways to express the greatest mystery of the world: the incarnation, in which God became man. The womb has been referred to as the “first home of the whole human race.” It is the place where life begins, where our stories start. In the womb the great men and women of history began their magnificent march through life. In the womb Divinity met humanity, and God the Son was born into the world. As one of the Fathers of the early church, St. Leo the Great, declared, “Within her spotless womb Wisdom built itself a house and the Word became flesh.” I was at the hospital for the birth of my fourth grandchild. Looking through the nursery window at the rows of newly born babies, I began to think of the great stories that would be written about these tiny lives. During his visitation with the Virgin Mary, the angel prophesied to Mary about the life of her child. Here in this hospital, I pondered, what would he say about each of these? Would they meet the one who also came from His mother's womb to redeem the world and kindle our hearts afresh for God? I thanked God for each baby alive and prayed for each story yet to be written. Prayer Heavenly Father, you have made the womb of each woman a very special place. Help us to hold fast to the sanctity of this first home of humanity, remembering the wonderful mystery, that God inhabited the womb of a young woman and came forth as the savior and deliverer of the world. We ask this in the Name of the one who came forth, Jesus Christ our Lord, Amen. Printable devotional To download today’s devotional as a formatted, printable PDF to share:
http://40daysforlife.com/media/day04.pdf