Dear Deacon John,
We need to know and exercise our rights as citizens to help save lives from abortion The Thomas More Society law firm has been on the front lines of protecting the rights of 40 Days for Life volunteers across the United States since the early days of the campaign … and they’ve just recorded another victory on behalf of a local vigil! It is often the case that the abortion centers have friends in local government who are eager to do things that will discourage vigil participants. We covered this important topic in a recent podcast episode. Not only does the Thomas More Society help 40 Days for Life ... but they are also currently defending investigator David Daleiden. Thankfully, they are great at what they do.
Here’s the latest example. Hollywood, Florida 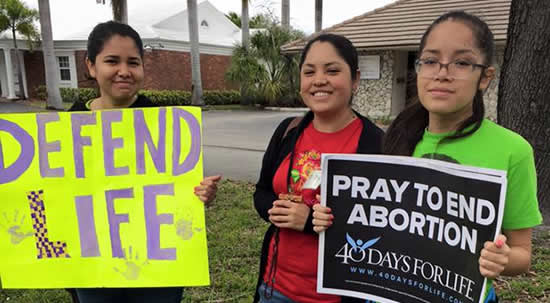 Early in the campaign, a city police officer told the people praying at the 40 Days for Life vigil that they were not permitted to stand on the sidewalk outside the abortion center.       He basically said the abortion business could decide who could or could not occupy the public sidewalk … and the center’s management didn’t want them there.   So the volunteers got in touch with the Thomas More Society’s team. “Forbidding pro-lifers from standing on public property violates 75 years of clear Supreme Court precedent that gives broad protections to those engaging in free speech in public places,” said Corrina Konczal, Thomas More Society associate counsel. The attorneys wrote to the city, challenging the officer’s directive.
It didn’t take long to get a response. The police department’s lawyer wrote that the volunteers were indeed in the right, and “the participants in the vigil are entitled to remain on the public sidewalk.” Thanks to the Thomas More Society for resolving this quickly … and thanks to the 40 Days for Life team in Hollywood for standing up for their free speech rights. Bloomington, Indiana

As with most of the campaigns across the country, the Bloomington, Indiana, campaign got off to a frigid and snowy start.   But the sacrifice of being out there praying in such inclement weather is truly what moves hearts and gets people thinking. “We've had one couple decide not to go through with their scheduled abortion,” said Monica in Bloomfield, “another couple whom we took to the local pregnancy care center on the counseling day, and lots of good conversations with passersby.” Volunteers have also had opportunities to practice Christ’s command to “bless those who persecute you.” Vigil participants also told of a mother and her son who stopped by to chat. The mom asked the boy if he’d be willing to pray outside for the babies. He said he could see himself doing that. They thanked the volunteers for being there.
“Hopefully,” Monica said,” they will be back to join us!”
Here's today's devotional from Fr. Frank Pavone, National Director of Priests for Life.
Day 17 intention
May all understand more deeply that the pro-life message is rooted in the two basic truths of life:      There is a God;      He isn't me
Scripture And the Lord God formed man of the dust of the ground, and breathed into his nostrils the breath of life; and man became a living being. — Genesis 2:7
Reflection from Fr. Frank Pavone From the beginning of the Bible until the end, the theme is echoed that God alone has dominion over human life. He made it; shared it; died to save it; will raise it up forever. The act of creation described in Genesis 2:7, and earlier in Genesis 1:26-27, is a sovereign act. God did not have to do it, and would have been happy forever without us. Yet without our asking for it or earning it, God brought us out of nothingness and into life, and sustains our existence at every moment. And He does so in Christ. "For by Him all things were created...in Him all things exist" (Colossians 1:16-17). "You are not your own," Paul declares in 1 Corinthians 6. God alone owns us. While He entrusts us to the care of one another, He does not allow any human being to own another. A Southern California abortionist, James McMahon, once explained how he justified killing children after 20 weeks gestation by partial-birth abortion. He did not deny that this was a child, but rather asked, "Who owns the child? It's got to be the mother." The struggle over abortion is really a struggle over the dominion of God. The Christian individual, and the Christian Church, cannot sit idly by when others declare that God is not God.
Prayer Lord, we are yours. Thank you for breathing into us the breath of life. Thank you for claiming us as your own. May our words and actions in defense of human life proclaim to all the world that you alone are Lord of life and death, Lord of our freedom and of our choices. We pray in Jesus' Name. Amen.
Printable devotional To download today's devotional as a formatted, printable PDF to share with friends: http://40daysforlife.com/media/day17.pdf
For life,
Posted by Deacon John at 6:07 AM