Dear Deacon John,
Prayer saves lives. That is why prayer is at the center of a 40 Days for Life campaign.
From the very beginning of 40 Days for Life, one man who saw the importance of praying outside abortion facilities was Fr. Frank Pavone, the national director of Priests for Life.
In our latest 40 Days for Life podcast, Fr. Pavone and I discuss the impact of prayer ... and the need to pray for the nation in 2016.
https://40daysforlife.com/2016/02/23/podcast-8/
Fr. Pavone also discusses the importance of elections and the role prayer can play as you consider candidates … and vote.
Prayer is powerful for the moms ... and for the abortion workers.  The staff’s reaction to the peaceful vigil can be anything from conversion to rudeness ... to simply strange. Here’s an example
Sterling Heights, Michigan

Abortion center staffs often try to intimidate prayer volunteers by making up imaginary rules and regulations governing the sidewalk.
The 40 Days for Life team in Sterling Heights saw this recently – on two separate occasions. Two men whose girlfriends were inside the facility came over to chat with vigil participants.
In both cases, the security guard came over to tell the men they were forbidden to speak to the people praying outside. The men were also told if they continued to talk to the volunteers, they would have to move their cars from the abortion center’s property.
“You’d think people would wonder about what kind of place this is if they won’t let you talk to someone,” said one of the 40 Days for Life team members.
“Taking away your right to speak must be a prerequisite to taking away your right to life. We were able to give one of the men information about free resources … please pray for them.”
On another occasion, the security guard spoke to a woman who’d come to talk to the vigil participants. When she finally made her way over to the group that was praying, she told them she’d had a baby after 25 weeks of pregnancy.
Her doctor had recommended an abortion – but she chose life, and both she and her baby were fine.
Newburgh, New York 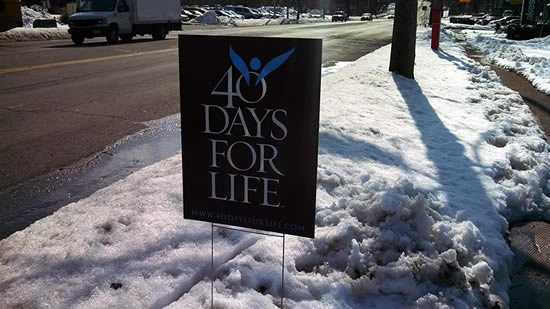 The prayer team in Newburgh was approached by a young woman who thanked them for being there. She said she’d had an abortion five years ago.
She was in an abusive relationship and was pressured to abort. Feeling scared, desperate and alone, she went through with it … and has been suffering ever since.
Thankfully, she was open to hearing about forgiveness … and was willing to take the hope and healing literature published by the Sisters of Life. She said whenever she has an opportunity, she lets people know how the abortion wounded her.
Please keep her in prayer.
Today’s devotional is from Carmen Pate of Alliance Ministries.
Day 14 intention Pray that the abortionists and all workers in abortion facilities would be troubled in their souls regarding their work and would seek truth. Scripture Let all bitterness, and wrath, and anger, and clamor, and evil speaking, be put away from you, with all malice. And be kind one to another, tenderhearted, forgiving one another, even as God for Christ's sake has forgiven you. — Ephesians 4:31-32 Reflection by Carmen Pate We see the evil and oppression in the world, the arrogance of those who mock God, the millions of innocent lives destroyed because of the greed of a few. Our flesh tells us that we should take justice in our own hands, but instead of vengeance, the Lord calls us to love our enemy, to forgive others as we have been forgiven. God loves the abortionist and the Planned Parenthood advocate just as much as He loves you. It breaks His heart to see them in bondage to sin and He is giving you this opportunity to introduce them to the Savior who sets the captive free. Though you may not experience direct interaction with these souls, your presence will not go unnoticed. Your non-verbal communications speak volumes about the God you serve. Forgiveness is an act of obedience to God (Colossians 3:13). Forgiveness is not condoning or overlooking the wrong behavior of others, but rather it is freeing ourselves so that God can work mightily through us to touch their hearts for Him. Let's join our hearts with His in recognizing that those in the abortion industry are not the enemy, but rather they are blinded by the enemy. God desires that we bring them the message of truth and hope found in Christ, but the messengers He will use are those willing to forgive. Prayer Dearest God, You tell us in Proverbs that the foolish and the wicked lack wisdom and understanding. I pray you will trouble the souls of those in the abortion industry so that they hunger for truth and cry out for freedom. I pray that my life would reflect my redemption so others may see it and trust in You. In obedience to You, and by your grace, I choose to forgive others as you have forgiven me. In the name of Christ my Redeemer I pray, Amen. Printable devotional To download today's devotional as a formatted, printable PDF to share with friends:
http://40daysforlife.com/media/day14.pdf
For life,