Dear Deacon John,
To honestly defend abortion, you must both deny science ... and ignore God. This is why the abortion industry uses vague talking points and generic slogans. In an effort to justify the unjustifiable, abortion advocates will often cite God – or try to use religion to justify their actions.   It’s happening on opposite sides of the earth – in England and Australia. But the message is anything but original. It’s just the familiar talking points of Planned Parenthood in the US. In England, “Christians for Choice” was founded “in response to anti-choice 40 Days for Life tactics of harassment and intimidation.” They went on to call the peaceful prayer vigils “a campaign of coercion.” In Australia, “40 Days of Love” said it was present outside the abortion center in Perth because “women should not be made to feel ashamed of their choices and everyone had a right to privacy.” Thankfully, a campaign volunteer told reporters what’s really happening at a 40 Days for Life vigil. “We are just praying for the conversion of hearts and spirits that people might change their mind about having an abortion.” That is a great response, because scientific facts alone are no good ... unless we are willing to pray to the God of Love, who can change any heart in an often confused world.
Tuscaloosa, Alabama 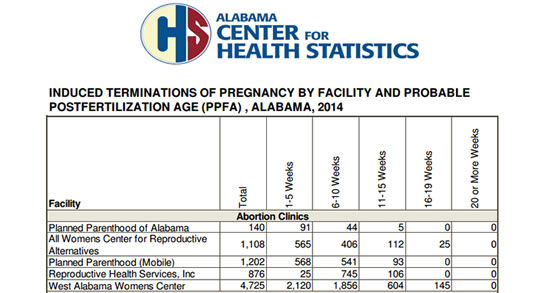 The message to local 40 Days for Life participants was a somber one: “Tuscaloosa is the abortion capital of Alabama.”
That, in a single sentence, is why the prayerful vigil is so desperately needed in this city, which is also the home of the University of Alabama.
The local leaders did their homework, consulting state records to learn the extent of the challenge they face. The Tuscaloosa abortion facility, West Alabama Women’s Center, did more than half of all abortions in Alabama in 2014. They learned that each year, more babies are aborted in Tuscaloosa County than are born alive.
“Last week,” said one of the Tuscaloosa volunteers, “the West Alabama Women's Center was so busy that there was standing room only inside. I spoke to some of the people who drove the clients to the clinic. Some of them were visibly upset because there were so many women inside.”
And so they pray.
Pensacola, Florida

As a couple arrived at the abortion center, a 40 Days for Life volunteer engaged them in conversation.
The husband said they were from outside the area, and his wife’s ob/gyn recommended abortion. She has a chronic condition that becomes difficult to manage when she is pregnant – and she’d just had a very difficult pregnancy.
The volunteer listened … and suggested a second opinion. And he knew just the doctor to refer them to. The man said they had the best doctors in the world, so that was that.
As they continued to talk, the vigil participant began to grasp the emotion of the situation. This man was afraid of losing his wife. But, the volunteer said, “Just give me 24 hours.”
The husband said he could not take another day away from his work and that they had to just do it – that he’d prayed about it and it seemed the right thing to do. The conversation ended, and they left.
About 15 minutes later, the vigil participant received a phone call – it was the husband. “I cannot do it,” he said. “I knew it was the wrong thing to do ... we need your help.” The man asked the volunteer to call him later, which he promised to do.
“Please pray for this couple as we connect them with the help they need,” he said.
Here's today's devotional from Rev. Ben Sheldon, president emeritus of Presbyterians Pro-Life...
Day 5 intention
May the truth of the final judgment shape our thoughts, priorities, and choices here on earth.
Scripture
The King will answer and say to them, "Assuredly, I say to you, inasmuch as you did it to one of the least of these my brethren, you did it to me."
— Matthew 25:31-46
Reflection from Rev. Ben Sheldon
Caring for others is not optional. Jesus' picture of the final judgment concludes with this sobering word: the wicked, who failed to care for others in their various needs (e.g., the hungry, the thirsty, the aliens, the naked, the sick, the imprisoned) will go away into everlasting punishment, but the righteous who did seek to meet those needs will end up with him, enjoying eternal life. We know that this was no parable! Jesus has given us fair warning! Everything in God's Word points to the truth that compassionate concern and practical care for all people, especially for the poor, the destitute, the weak and needy is required of us, if indeed we hope to escape the punishment of the fire of hell. And who are the poor and needy, if not helpless, unborn babies, as well as the aged and infirm at the other end of life? Surely the "least of these" embraces not only those at both ends of the continuum of life, but all others in between. Just how we, as Christ's true followers, respond to his admonition "inasmuch as you did it to the least of these, you did it to me" will determine whether we enjoy eternal bliss in his presence or the bleak and dreadful reality of eternal punishment in hell. Nothing in God's Word could be clearer!
Prayer
Gracious and merciful Father, we gladly embrace your Word that counsels us to care for the least of your children, and we renew our dedication to defending the unborn and all whose right to life is compromised by our godless society's selfish lack of concern. Free us from our own failures and sins so that we will be truly pro-life in every area of our lives. Through Jesus Christ our Lord, Amen.
Printable devotional
To download today's devotional as a formatted, printable PDF to share with friends:
http://40daysforlife.com/media/day05.pdf
For life,
Posted by Deacon John at 2:07 PM