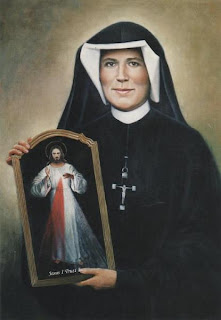 The Sunday after Easter is Divine Mercy Sunday.

You have likely seen the picture of Jesus standing with his hand pointed to his heart, from which red and pale rays emanate. The words "Jesus, I trust in you" are at the bottom. This image represents the devotion to Divine Mercy, based on revelations given to St. Faustina Kowalska (1905-1938). The image itself was revealed to her, as was the "Chaplet of Divine Mercy," in which we pray the following words:

"Eternal Father, I offer You the Body and Blood, Soul and Divinity of Your dearly beloved Son, Our Lord Jesus Christ, in atonement for our sins and those of the whole world. For the sake of His sorrowful Passion, have mercy on us and on the whole world."

Many of the faithful, especially in the pro-life movement, practice this devotion. Indeed, the link between this devotion and abortion is established by St. Faustina herself and recorded in her "Diary." Fr. Seraphim Michalenko, MIC, who was a principal translator of St. Faustina's diary, and the postulator of her cause of canonization, writes the following:

"On at least three occasions, from 8:00-11:00 in the evening, she felt like her insides were being torn apart. She suffered so much that she thought she was going to die. The doctors couldn't figure out what was ailing her, and no medication was able to alleviate her sufferings. Later, she was given to understand that she was undergoing those pains for mothers who were aborting their children (Diary, 1276).
"On another occasion, she had a vision of an angel coming with thunderbolts to destroy one of the most beautiful cities of her country. And she felt powerless to do anything about it (Diary, 474). What antidote did the Lord give her? The Chaplet of Divine Mercy. [She explained] that the city was to be chastised for its sins, primarily the sin of abortion." ("Wombs of Mercy," Marian Helpers Bulletin, Summer 1995, p.13).

Pope John Paul II personally emphasized this connection in 2003 when he signed a special Papal Blessing for those who pray the Chaplet for an end to abortion. The blessing, signed on the Feast of the Annunciation, is addressed to the Eucharistic Apostles of the Divine Mercy and to "all the faithful worldwide who join them in offering the Divine Mercy Chaplet…for mothers, that they not abort their offspring; for infants in danger of being put to death in the womb; for a change of heart of providers of abortions and of their collaborators; for human victims of stem cell research, genetic manipulation, cloning and euthanasia; and for all entrusted with the government of peoples, that they may promote the Culture of Life, so as to put an end to the culture of death."

The world needs mercy. As Chairman of Rachel's Vineyard Ministries, I see that mercy being poured out each day on thousands of men and women worldwide who have lost children to abortion. Let's pray in these days especially for them.