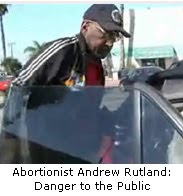 Judge Lets Rutland Keep License - CA Med Board Asks 'How Many Patients Have to Die Before a Doctor is Shut Down?'

SAN DIEGO, Feb. 19 /Christian Newswire/ -- At an emergency hearing yesterday, Judge James Ahler allowed troubled abortionist Andrew Rutland to keep his restricted medical license and indicated that he may continue to do early medical abortions that do not require surgery.

The California Medical Board had asked for the emergency suspension after a Board investigator caught him doing medical abortions at a Chula Vista, California, abortion clinic during an undercover sting earlier this month. Rutland was barred from performing abortions and surgeries in January after he killed a woman during a botched backroom abortion at a dirty, ill-equipped acupuncture clinic in San Gabriel. The Board interpreted the order to include medical abortions.

After the hearing, Kathleen Nicholls of the California Medical Board commented, "How many patients have to die before a doctor is shut down? It's unfortunate someone else is going to have to die to change this order."

During the Board's sting, an investigator posing as a pregnant woman went to Rutland's Chula Vista clinic and asked for a surgical abortion. Rutland tried to persuade her to get a medical abortion. When she insisted on surgery, an appointment was made for her at another time. The judge rejected arguments by the Board that medical and surgical abortions pose similar risks.

"Folks, this is not a referendum on abortion," he said.

"This is one of those times when one has to shake his head and ask what the judge was thinking. Rutland has a record of human destruction a mile long and he continues to flout the law and the restrictions put on him. He is a danger to the public," said Operation Rescue President Troy Newman. "When Rutland injures or kills another person, and with his track record, that could be any day now, Judge Alher will have that on his conscience."

Operation Rescue had conducted its own undercover investigation of Rutland's Chula Vista clinic and recorded a telephone conversation on February 3, between Rutland employee "Rhea" and a woman posing as a potential abortion patient. During that conversation, Rhea offered the option of surgical or medical abortions to the caller and assured her that Dr. Rutland would be handling her procedure. While Rutland claims that his daughter now does all the surgical abortions, there was never any mention that any other physician would be involved in the abortion during the recorded conversation.

Operation Rescue immediately contacted the Medical Board and submitted a copy of the recording. The California Medical Board has stated that it will now press forward with a full Board hearing to revoke Rutland's license "as expeditiously as possible."