Cardinal Bertone Has a Fever, He Wants the San Raffaele:

Bertone Has a Fever, He Wants the San Raffaele

And he's putting 200 million euros on the table. But the purchase of the hospital of Fr. Verzé is threatening to turn into a boomerang for the cardinal secretary of state. His attempt to win control of the Catholic University is also failing 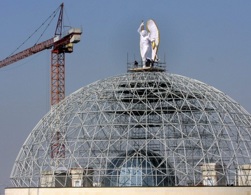 ROME, July 15, 2011 – While Benedict XVI stays in the quiet of Castel Gandolfo, the Vatican secretariat of state is seeing one feverish day after another.The fever was not only raised by the illicit episcopal ordinations in China. The secretariat of state is also racked with spasms in what it considers its back yard, Italy.Cardinal Tarcisio Bertone wants to create in Italy a Catholic hub of excellence in the field of health. By uniting under the control and leadership of the Vatican three cutting-edge hospitals: the Bambino Gesù, the Gemelli, and the San Raffaele.The Bambino Gesù, a hospital that specializes in pediatrics with its center of operations in Rome, has already been under the control of the secretary of state since 2008, when he installed as its president a manager under strict obedience to him, Giuseppe Profiti, already in his favor as vice-president of another important hospital, the Galliera of Genoa, during the same years when Bertone was archbishop of that city, and therefore, by statute, also the president of that hospital.But not the Gemelli and the San Raffaele. They do not depend in any way on the Vatican secretariat of state. For now.The frenetic activity that Bertone is developing is aimed precisely at their takeover.And the success or failure of the operation will be determined in the shortest of time, in a matter of days.