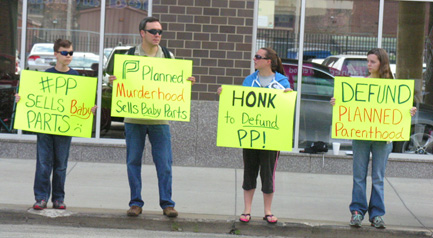 CHICAGO, April 20, 2016 /Christian Newswire/ -- On April 23, nationally coordinated protests will be held at over 200 Planned Parenthood centers throughout the United States, drawing voters' attention to the ugly side of the nation's largest abortion chain. These protests are being organized by the #ProtestPP coalition, formed in response to the undercover videos released last year showing Planned Parenthood officials discussing the harvesting and selling of body parts from aborted children.

Despite the controversy created by the undercover videos-including possible illegal activity- Planned Parenthood continues to receive over $500 million from state and federal governments annually. The organizers of #ProtestPP are calling on their fellow Americans to vote for candidates this year who will promise to end this massive taxpayer subsidy for the nation's largest abortion chain.

"The undercover videos we saw last year showed the cruelty of abortion in a singular way," said Eric Scheidler, executive director of the Pro-Life Action League and one of the national  co-directors of the protest day. "It's chilling to see Planned Parenthood's doctors talk about how to crush an unborn child's body in order to most effectively procure his or her organs. This organization should not be receiving any taxpayer funding for any reason."

Protestors throughout the country will also be standing in solidarity with David Daleiden, the pro-life whistleblower who is facing baseless civil and criminal charges for conducting a 30-month undercover investigation of the abortion industry's trafficking in fetal tissue. "Planned Parenthood and their powerful allies in government are trying to discredit and silence pro-lifers who are guilty of nothing more than exposing the shocking truth about their abortion practices," said protest co-director Mark Harrington, executive director of Created Equal. "As an investigative journalist, Mr. Daleiden's protected free speech is being criminalized while Planned Parenthood's criminal behavior is being entirely overlooked. On April 23, we'll be setting the record straight in communities all over the country."

The protests will also highlight the gap between Planned Parenthood's claims about their role in women's healthcare and the documented reality. "Planned Parenthood insists that poor women depend on them for basic healthcare," said Monica Miller, protest co-director and head of Citizens for a Pro-Life Society, "but in fact they provide fewer and fewer services, to fewer and fewer women every year-except abortion. Planned Parenthood's abortion numbers keep going up. They're now responsible for nearly a third of all abortions in our country."

#ProtestPP is a coalition of state and national pro-life groups, headed by three national pro-life activist organizations: Citizens for a Pro-Life Society, Created Equal, and the Pro-Life Action League. In the wake of the coalition's two national days of protest last year, more than 20 Planned Parenthood facilities closed and nine states voted to strip the organization of state funding.

See also ProtestPP.com.
Posted by Deacon John at 11:06 AM