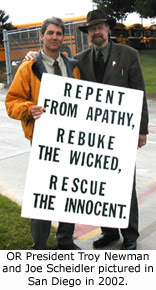 30 Years Ago Today. . .Abortion Profiteers Exposed February 13th, 2008 [Photo] On February 13, 1978, the Chicago Sun-Times, aided by pro-life activist Joe Scheidler, published the first of a seven part series titled "Abortion Profiteers" that exposed unsafe and downright horrifying conditions at Chicago area abortion mills. The result? Two abortion mills were closed, one abortionist lost his license and a grand jury convened to investigate them further. If anything, conditions at America's abortion mills are even worse today. Operation Rescue has followed Scheidler's example and worked hard to document and "expose the unfruitful works of darkness" as manifested in the abortion industry, and now the word is finally starting to get out. The LA Times published a shocking story about a Southern California abortion mill chain last week, and the Chicago-Tribune ran a front-page story on the grand jury investigation of late-term abortionist George Tiller earlier this week. These are just the latest in a growing number of news articles that have revealed the seedy reality of today's shockingly hazardous abortion industry. We pray such exposés will help our nation to wake up to the dangerous and predatory nature of America's abortion mills, and bring a permanent end to decriminalized abortion.
_____________________________ http://www.suntimes.com/news/metro/history/790873,CST-NWS-high13.article

1978: Series exposed unsafe abortions February 13, 2008 In 1978, the Chicago Sun-Times wasn't interested in the morality of abortion when it spent five months looking at the procedure. The paper wanted to know: Were women who had abortions here receiving the safe, competent care the U.S. Supreme Court said they were entitled to back in 1973? What Sun-Times investigative reporters Pam Zekman and Pamela Warrick - working with the Better Government Association - found in their series "The Abortion Profiteers" was, in some cases, downright terrifying.

RELATED PDF: Sun-Times front page from 1978 The Sun-Times/BGA team had people work undercover in six Michigan Avenue clinics. The team uncovered incompetent and unqualified doctors who performed abortions without giving their patients anesthetics. Sometimes, it made no difference if a woman was actually pregnant - she'd still be sold an abortion. In one truly horrifying case, a couple was sent to a disreputable Detroit abortionist whose dog accompanied the nurse into the operating room - then lapped up blood from the floor. The series prompted immediate action. Within two weeks, two abortion clinics were closed down, a doctor's license was revoked, a criminal investigation was launched and a governor's task force was appointed to re-evaluate the state's regulation and licensing of abortion clinics and counselors. One abortion doctor highlighted in the Sun-Times' series renounced his work and became a member of the Moody Church on North La Salle. The doctor, Arnold Bickham, once described himself to Zekman as "the most notorious physician in this city." He indicated he made $1 million a year performing abortions. His medical license was temporarily suspended because, according to the state, he had operated on women who weren't pregnant and rushed abortions so much that he didn't even wait until the anesthesia set in. Bickham eventually quit the church and returned to performing abortions. His medical license was revoked in 1988. He later became an administrator at Chicago Public Schools.

About Operation Rescue Operation Rescue is one of the leading pro-life Christian activist organizations in the nation. Operation Rescue recently made headlines when it bought and closed an abortion clinic in Wichita, Kansas and has become the voice of the pro-life activist movement in America. Its activities are on the cutting edge of the abortion issue, taking direct action to restore legal personhood to the pre-born and stop abortion in obedience to biblical mandates. Click here to make a donation.