Pope Benedict prays for those who defend life 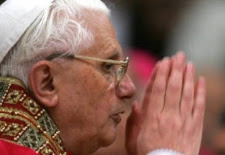 Vatican City, February 4 (CNA).-With Lent approaching, Benedict XVI set aside yesterday's Angelus gathering as a time of prayer for the different areas around the world in need of peace and for those who work to defend life in all its stages.

The Holy Father began his prayer intentions by recalling that Saturday marked the Day of Consecrated Life.  He then called on the faithful to offer prayers for all those people whom "Christ calls to follow Him more closely with a special form of consecration."

"Another prayer intention", said the Holy Father, "is offered to us by the Day for Life which is being celebrated today in Italy and which has as its theme 'Serving life'".

This Day for Life should draw each person, according to their ability, to "feel in themselves an obligation to love and serve life, from its beginning to its natural end. It is, in fact, everyone's duty to welcome human life as a gift to be respected, protected and promoted, even more so when it is fragile and in need of attention and care, either before birth or when it is in its final stages," the Pope said.