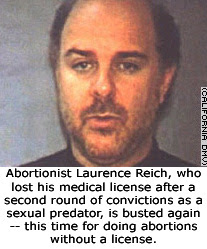 LOS ANGELES, Feb. 26 /Christian Newswire/ -- Abortionist Laurence Reich was arrested and jailed last week in Los Angeles for practicing medicine without a license after a special LAPD Task Force discovered he had been doing abortions illegally. Reich, who faces three felony counts, posted a $60,000 bond and was released.

A protective order has been placed on the case, but it is known that the arrest is a result of an Health Authority Task Force (HALT) investigation that culminated in the raiding of several Clinical Medical Para La Mujer De Hoy abortion mills on August 1, 2007, and the arrest of owner Bertha Bugarin and her sister, Rachel for doing abortions without medical licenses.

Reich, an Osteopath, was forced to surrender his medical license on April 14, 2006, after a conviction on two counts of sexually molesting his abortion patients. Reich had previously served 10 years probation on a similar conviction in 1984. Operation Rescue exposed information it obtained that indicated that Reich engaged in gross sexual "misconduct" with his patients, which included fondling them before, during, and after abortions for his own gratification.

"Laurence Reich is a rapist who uses abortion to gain access to his victims. It doesn't get any worse than that. Operation Rescue has for years called on authorities to put him in jail because of his pattern of perverted behavior," said Operation Rescue President Troy Newman. "The law has no meaning for these people. Only substantial jail time will adequately protect the public from falling prey them."

"We encourage pro-lifers across the country who minister outside abortion mills to monitor their communities' abortionists. As more and more abortionists are banned from the practice of medicine, the chances increase that they will simply set up shop elsewhere," said Newman.

"Abortion is a seedy business that attracts the bottom of the barrel. You can bet Reich and Bugarin are not the only ones out there victimizing women and flouting the law. Pro-lifers need to be on guard and report suspicious activity to the appropriate authorities, for the protection of women and their innocent babies."

About Operation Rescue
Operation Rescue is one of the leading pro-life Christian activist organizations in the nation. Operation Rescue recently made headlines when it bought and closed an abortion clinic in Wichita, Kansas and has become the voice of the pro-life activist movement in America. Its activities are on the cutting edge of the abortion issue, taking direct action to restore legal personhood to the pre-born and stop abortion in obedience to biblical mandates.