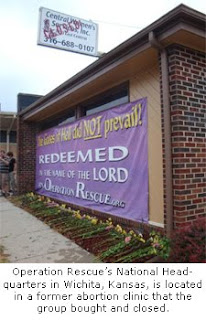 WICHITA, Kan., March 25 /Christian Newswire/ -- Telephones at Operation Rescue's national headquarters were inundated with hateful messages in the wake of the weekend vote on health care in the House of Representatives. Operation Rescue has been outspoken in its opposition to the Obama health care takeover plan, especially provisions that would provide taxpayer funding for abortions.

"Normally we don't give the threats and hateful calls we receive much thought. But lately there has been much made about threats to Democrats that supported the health care takeover, and we thought that people needed to know that the hate calls are flowing both ways," said Operation Rescue President Troy Newman.

"This kind of harassment and intimidation will never deter us from our mission to save the lives of innocent babies and stop abortion in our nation," said Newman. "However, we do take security precautions and are working with the FBI, which continues to investigate death threats against me and my staff."

Listen to sampling of the calls (Warning: Strong language)

About Operation Rescue®
Operation Rescue is one of the leading pro-life Christian activist organizations in the nation and has become a strong voice for the pro-life movement in America. Operation Rescue is now headquartered in a former abortion clinic that it bought and closed in 2006. From there, Operation Rescue launches its innovative new strategies across the nation, exposing and closing abortion clinics through peaceful, legal means. Its activities are on the cutting edge of the abortion issue, taking direct action to stop abortion and ultimately restore legal personhood to the pre-born in obedience to biblical mandates.