Dear Deacon John,
Thus far, we’ve seen 83 abortion facility employees have conversions and leave their jobs during 40 Days for Life campaigns.
You heard from two of them — who not only left but then joined the vigil — in the video we sent yesterday. If you missed it (or just want to see it again), watch it and share with friends. Here's the link:
http://40daysforlife.com/blog/?p=4655
I can’t say where, of course … but we’ve heard that abortion workers have already reached out to prayer volunteers on Day 1 so keep them in your prayers! For these 40 days, we pray for the babies, the men and women seeking abortion — and yes — the workers in the abortion centers. Those prayers will go on day or night … rain or shine … on four continents.
Columbia, Missouri

The darkness of the night provided a solemn setting for the opening candlelight vigil in Columbia.
This location is a Planned Parenthood center that once offered abortions — but has not been able to keep an abortionist on staff. There have been no abortions here for 15 months. Prayer volunteers are hoping to see the day when this facility goes out of business.
White Plains, New York 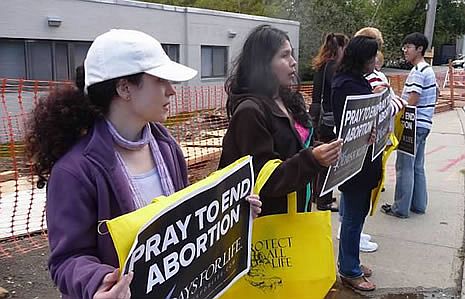 It was sunny for the kickoff rally in White Plains. “We had a good turnout,” said Gerald. “Praise God!”
He noted with sadness that 2,257 abortions took place in the area in 2011, the most recent year reported. But “there is some good news here … the abortion numbers are declining year over year.”
Port Charlotte, Florida

It was not so sunny in Port Charlotte, where their 40 Days for Life campaign started out in the rain. They’ve had lots of rain — even flooding lately.
But after the vigil began, the rain was replaced by a rainbow. “Praise God for the wonderful sign,” said Stephanie in Port Charlotte. 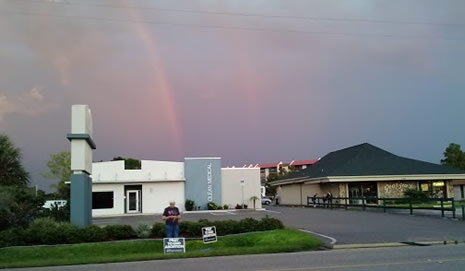 Here's today's devotional from Fr. Frank Pavone, national director of Priests for Life:
Day 2 intention
Pray for those who work in the abortion industry, and for those who have repented of committing abortions and have resolved to defend life. Scripture Jesus called out with a loud voice, "Father, into your hands I commit my spirit." When he had said this, he breathed his last. The centurion, seeing what had happened, praised God and said, "Surely this was a righteous man." -- Luke 23:46-47 Reflection
"Those of us who have participated in the killing of unborn children are the Centurions of today. We have dropped our swords against the unborn child. Now we must recognize the depth of our guilt and deal with the ramifications... To revitalize our humanity we need to forgive and be forgiven, to reconcile and be healed." These words come from a brochure of the Society of Centurions, an organization for former abortion providers. These words convey in a beautiful and moving way what is happening across the nation as hundreds of abortionists and their staff members experience repentance, conversion, and healing. How does this conversion begin? Dr. Philip Ney writes, "The factors that changed their opinion on performing abortions, in the following order of frequency, were: evidence of the infant's humanity, a spiritual experience, personal distress, evidence of the mother's distress, scientific articles, being accepted as a person, a personal relationship with a pro-lifer, pro-life pickets." (The Centurion's Pathway, p. 77). The journey is not easy. But the Jesus who heals us calls us to face the truth of what we've done, make restitution where possible, and engage in the hard work of mending relationships. Let's pray for the Centurions; may their numbers increase! Prayer Lord, we thank you for those who have repented of committing abortions and have resolved to defend life. We too repent and resolve. We repent of every instance in which fear has made us silent when we should have spoken. We repent of the ongoing bloodshed in our land, and for thinking that we can deprive the unborn of protection but keep it for ourselves. We resolve that we will advance the cause of righteous candidates for public office, and that we will be more afraid of offending you by our silence than of offending others by our speech. We resolve that we will proclaim your name to the nations, through Jesus Christ our Lord. Amen. Printable devotional
To download today's devotional as a formatted, printable PDF to share with friends: http://40daysforlife.com/docs/fall2013day02print.pdf
For Life,
PS: If you have stories to share from the first day of your local 40 Days for Life campaign, please add a comment at today's blog posting at: http://40daysforlife.com/blog/?p=4672
Posted by Deacon John at 11:20 AM