Racism and Bigotry of Margaret Sanger 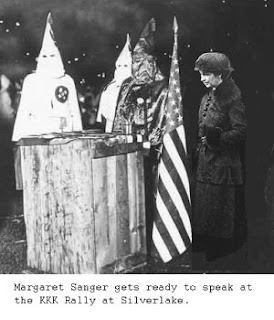 Christian Activists to Protest Against the Racism and Bigotry of Margaret Sanger at the University of Mary Washington in Fredericksburg, Virginia
The state university is featuring the founder of Planned Parenthood as part of their "Great Lives Lecture Series."

FREDERICKSBURG, Va., March 19 /Christian Newswire/ -- Activists will gather Thursday, March 20, at 7:00 P.M. outside of the Dodd Auditorium on the campus of the University of Mary Washington in Fredericksburg, Virginia, to protest against the racism and bigotry of Margaret Sanger.

Individuals will be praying and holding signs which include some of Margaret Sanger's racist and bigoted quotes.

Some of Margaret Sanger's quotes are:

"We don't want the word to go out that we want to exterminate the Negro population."

"Eugenics is the most adequate and thorough avenue to the solution of racial, political and social problems."

"The mass of Negroes, particularly in the South, still breed carelessly and disastrously." -- From Sanger's "Negro Project"

Kaitlin Clare, the Project Director for the Christian Defense Coalition, states, "It is a shame and a disgrace that the University of Mary Washington, an institution that was once only for women, that is named for a great women in American history, and prides itself on teaching and empowering women today, would honor Margaret Sanger, an avowed racist and bigot. Ms. Sanger's racist views have created a legacy of pain and hurt for women and other minorities."

Rev. Patrick J. Mahoney, Director of the Christian Defense Coalition, adds, "Over the past few days, America has had to confront the ugliness of racism and bigotry. The overwhelming lesson learned is, that on every level racism must be condemned and repudiated. That is why it is so troubling for the University of Mary Washington to feature such an avowed racist and bigot as Margaret Sanger as part of their 'Great Lives Lecture Series.'

"The founder of Planned Parenthood was determined to reduce the number of African-Americans through her 'Negro Project.' She believed in eugenics which was the same philosophy that Adolf Hitler embraced in supporting the killing of six million Jews. We will be out praying and holding signs as a public witness against racism and injustice."