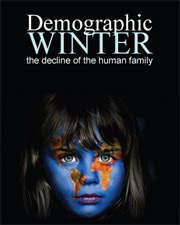 ower, winning 308 of 480 seats in the lower house of parliament.

Lost in election analysis is the role declining birth rates and a rapidly aging population are playing in Japan's ongoing economic crisis.

According to a story in today's New York Times: "Many Japanese saw the vote as the final below to the island nation's postwar order, which has been slowly unraveling since the economy collapsed in the early 1990s." In that period, Japan's stock market fell 80% from its all-time high. Its real estate market lost 60% of its value.

Barry McLerran, producer of both "Demographic Winter" and the just-released sequel, "Demographic Bomb," noted Japan has one of the 10 lowest birthrates in the world - 1.25 children per woman, with a birth rate of 2.13 needed to replace current population.

Said McLerran: "The proportion of Japanese over 60 years of age went from 11.6% in 1989 to 21.2% today - the highest in the world. This impacts everything from the nation's tax base to productivity and pensions."

McLerran: "In the 1990s, the sun began to set on the Japanese economic miracle. But the worst is yet to come, as the nation desperately seeks solutions to its demographic crisis. The incoming government has announced it will pay a $270-per month subsidy to families for every child. Russia, which has a birth rate of 1.17, has been doing something similar for several years, without significant results."

"Demographic Winter" describes the causes and consequences of plummeting birth rates worldwide (down more than 50% in the past 40 years). "Demographic Bomb" focuses on the role demographic winter has played in the worldwide recession, as well as the contribution of the international population-control movement. It specifically discusses the role of demographics in Japan's economic decline.

To schedule an interview with a spokesman for the documentaries, contact Don Feder at 508-405-1337 or dfeder@rcn.com