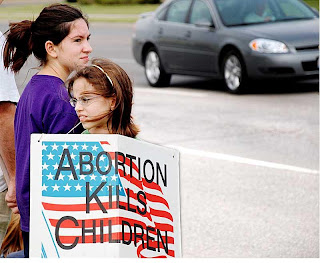 Wednesday morning, August 19, at Family Planning Associates on Miramar Road in San Diego there were three of us sidewalk counselors. Each of us manned a different driveway. The day was slow with approximately eight women entering the mill. Each of us spoke to anyone entering or exiting the parking lot.

Luis spoke to a Hispanic couple that stopped in the driveway closest to the pyramid. They spoke in Spanish. The male was driving and the passenger named "S" looked in her mid-thirties. As he explained the abortionist's horrific medical history and gave them information on Culture Of Life Family Services, the women did not seem to react. However, at the end of their discussion, they both smiled and thanked him for the info and drove in. However they went into the mill and remained inside when we left at 9:30.

Terry spoke to a mother and two young women in a white Mercedes. After explaining the history of malpractice's, gross negligence's, and license suspensions of the abortionist, she gave the mother information on Culture Of Family Life Services and encouraged them to go to a competent doctor instead of going in the mill. They pulled into the parking lot, read the pamphlet and called Culture of Life. Not getting an answer, they drove back to Terry and told her no one answered the phone at Culture of Life. Terry explained that Culture of Life was most definitely open and the staff was probably attending a patient. Thanking her, they said they would go to Culture of Life and drove out heading to the freeway.
- Terry, Luis & David