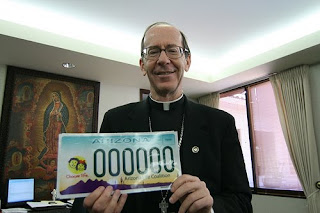 Editor's note: This is the second part in a new series of columns in celebration of the holy Year for Priests.

The influence of the devil can never overcome the power of God's grace. Jesus assures us of this when He tells Peter (Mt 16:18), "I say to you, you are Peter, and upon this rock I will build my Church, and the gates of the netherworld shall not prevail against it." But the evil one, nonetheless, continues to tempt and test all of us during our life on earth.

Satanic attacks were commonplace in the life of Fr. John Vianney.

For 35 years, the devil taunted and harassed him, not only in spiritual ways but even in tangible and audible ones. These latter, demonic acts normally are quite rare. But, by the influence of the devil, the Cure of Ars' bed was moved about, crashing noises resounded, fires were ignited, and other harassments occurred, all in an effort to stop or at least to curtail the priestly ministry of Fr. Vianney. Why did God allow these to occur? How did the saint respond? We shall examine these questions today. We shall also look, in subsequent parts of this series, at other defining characteristics of his life, namely his love for beauty, and his pastoral service of hearing confessions.

Infestations by the devil

Fallen angels, also known as devils and evil spirits, try to hinder all of us in our pursuit of holiness. Their ordinary ploy is by means of temptations, which God allows so that we can make good use of our freedom in resisting them and thus growing to fuller maturity in Christ.

In addition to these ordinary ploys, demons resort to other extraordinary acts, on rare occasions, with the same intention of thwarting the plan of God and undercutting our filial trust in Him. These harassments can be of three kinds: infestations, obsessions and possessions.

With infestations, the devil makes use of noises, outcries, rattling, apparitions and other extraordinary outbursts of some sensible nature aimed at terrifying people, intending to undercut their confidence in God. He used these repeatedly on the Cure of Ars, sometimes to keep him from getting badly needed sleep, at other times to disturb his peace of mind and to try to shake his trust in God. All these were aimed at disrupting the effective ministry of this holy priest.

Early on, Fr. Vianney became aware that these infestations were most outrageous just before an outstanding action of grace was about to occur through his priestly ministry, usually the conversion of a sinner. In fact, he remarked that the worst assaults of the devil happened when he was on the verge of "landing a big fish," by which he meant welcoming back a baptized person who had fallen far into the darkness of despair. With this insight, Fr. Vianney calmly ignored the infestations, and looked forward with joyful hope to the next victory of grace about to occur through the Sacrament of Penance. If we ever have to deal with similar harassments, we should follow this saintly priest's good example of calmly ignoring the devil, confidently turning to God in prayer, and deepening our communion with Christ through the Eucharist and the other sacraments.

Obsession and possession by the devil

The Cure of Ars himself never suffered from demonic obsession or possession, but he dealt with them in others whom he served in his sacred ministry. With obsession, the devil goes beyond infestations and actually plays on the external senses of the body or influences a person's memory or imagination. In cases of possession, which are even more rare than those of obsession, the devil actually uses the whole human organism, with the exception of the mind and will.

The suffering that obsession and possession bring to a person is almost unimaginable. Moreover, to be freed of these satanic harassments, the Church's sacred power from Christ is needed. This is why bishops appoint exorcists in their dioceses to offer pastoral care for persons afflicted by the devil in these horrifying ways. Through prayers of deliverance and the rites of exorcism, persons are freed from satanic power and their peace of heart and soul is restored.

Very easily, these harassments by the devil can be misunderstood and even exploited by sensationalist segments of the media or by enemies of the Church. For that reason, the Church avoids publicity about them and handles each case without fanfare. But it is more than foolish for any of us to dismiss the reality of the devil and his works of darkness, for as St. Peter warns (1 Pet 5:8-9), "Be sober and vigilant. Your opponent the devil is prowling around like a roaring lion looking for someone to devour. Resist him, steadfast in faith, knowing that your fellow believers throughout the world undergo the same sufferings."

'He cast out demons'

It could be said that the priesthood is not fully understandable except in contrast with the work of the devil. The mission of a priest is linked intrinsically to God's forgiveness of sins through Christ, and to His mission of defeating the devil and ushering in the Kingdom of God. We see this, above all, in the life of Christ Himself, our eternal High Priest. Recall that Jesus cast out seven demons from Mary Magdalene (Cf. Lk 8:2), and expelled a whole legion of demons from a possessed man in the territory of the Gerasenes (Cf. Mk 5:1-20). The Catechism of the Catholic Church says of Him (#539), "Christ reveals Himself as God's Servant, totally obedient to the divine will. In this, Jesus is the devil's conqueror: He 'binds the strong man' to take back his plunder. Jesus' victory over the tempter in the desert anticipates victory at the Passion, the supreme act of obedience of His filial love for the Father."

Even before Jesus began His public ministry, the Father allowed Him to be tempted by the devil in the desert (Cf. Mt 4:1-11). He successfully resisted the temptations and made it possible for us to do the same when we are one with Him in faith. In His public ministry, Jesus cast out devils and vanquished the evil one as an integral part of His mission from the Father. He did this in the most humble of ways; as the Letter to the Hebrews says (4:15), "For we have not a high priest who is unable to sympathize with our weaknesses, but one who in every respect was tested as we are, yet without sinning."