Dear Deacon John,
It’s Day 20! We’re at the halfway point of this 40 Days for Life campaign – and so far, we have reports of … … 181 babies (and their moms) saved from abortion! Praise God for these children being alive today – and these are just the ones local volunteers know about. Many of these moms were given a witness of hope by volunteers standing in cold rain, sleet or snow. In North America, at least, this seems like it’s the winter that will never end! Here are a few stories that show how it has been hard, but worth it ... Birmingham, Alabama 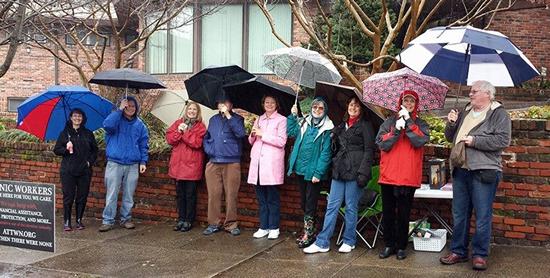 “We had rain on this busy morning,” said one of the 40 Days for Life team members in Birmingham. “What a sidewalk covered with prayer and umbrellas!” One woman arrived and spoke with one of the prayer volunteers. She was abortion minded, but gradually began to talk. She read the information she was given, but still went in for her appointment. But after a while, she came back out … and followed the volunteer to the pregnancy help center.
She will not be having an abortion! Another woman arrived and stopped to talk on her way inside ... and told vigil participants that the baby’s father did not want her to have an abortion. He had refused to go with her to the appointment. After more talk – and some tears – she was soon on her way to the pregnancy center to learn about life-affirming options.   She had been looking for a sign from God not to have her abortion. The sight of a sidewalk full of people praying was just that sign. “Another save!” said the volunteer. “Glory to God!” Falls Church, Virginia “Thanks to all of you who withstood the super cold weather during 40 Days for Life,” said Ruby, the local coordinator in Falls Church. “Your sacrifice and prayers have paid off!” Vigil participants watched as a couple walked into the abortion center – they were not interested in hearing about the help that was available. But right before they got inside, Ruby told the woman, “You deserve better than abortion. You are a child of God.” Later, as they were leaving, Ruby again offered them a pamphlet. But the man said they didn’t need any help. When asked why, he said, “She changed her mind!” When the woman was asked why she was considering abortion in the first place, she pointed to the man and said she didn’t want him to be able to visit “the kid.” “I didn’t get it at first,” Ruby said. “It was the first I’ve heard of such a reason.” The father was beaming with joy, noting that the mother now doesn’t mind him visiting “the kid.” “This child is lucky his mother changed her mind at the last minute,” Ruby said. Obviously, all three – mother, father and child – need a lot of help and a lot of prayer. “But praise be to God, she changed her mind!”
Today’s devotional is from Ernest Ohlhoff, outreach director at National Right to Life. Day 20 intention
We pray for humility in our work for God’s Kingdom. Scripture Let this mind be in you which was also in Christ Jesus, who being in the form of God did not consider it robbery to be equal with God, but made Himself of no reputation, taking the form of a bondservant, and coming in the likeness of men. And being found in appearance as a man, He humbled himself and became obedient to the point of death, even the death of the cross. — Philippians 2:5-8 Reflection by Ernest Ohlhoff There is no limit to what we can accomplish when we don't care who gets the credit. Jesus Christ’s life on earth exemplifies a total submission to the will of the Father. His humility, compassion, gentleness and thoughtfulness are reflected over and over again in the New Testament. He was God incarnate, yet He chose to be born to a humble, working class home. How absurd it must have seemed to the rich and powerful that the Son of God, the Messiah, the one foretold by the prophets, the King of the Jews was born and raised as a simple peasant. During His thirty-three years on earth, He sought no riches, claimed no secular power and gathered no possessions. His short time on earth changed more lives, softened more hearts, and gave hope to more people, than all the rich and powerful human kings combined. And, at the end of His life on earth, by dying on the cross, He opened the door to eternal life for those who heed his words and follow in his footsteps. Prayer O Lord, help us follow in the footsteps of Jesus. Let us humbly and diligently work to restore legal protection for the unborn, the disabled, the medically dependent and all innocent children of God whose lives are threatened. Let us remember the old adage that “He can never lead who has not first learned to obey.” And, Lord, grant us a peaceful heart as we labor in your name, Amen. Printable devotional To download today’s devotional as a formatted, printable PDF to share:
http://40daysforlife.com/media/day20.pdf
As we hit the midway point of this 40 Days for Life, let’s double our efforts and finish strong!
For life,