Dear Deacon John,
Among the 20 countries where 40 Days for Life vigils are currently in progress are Australia and New Zealand. Volunteers have an uphill battle in these nations. Abortion seems to be deeply embedded in the culture … and in many cases, it is government-funded. But 40 Days for Life is shining light where it is so greatly needed. Here are a few examples. Brisbane, Australia

The 40 Days for Life team in Brisbane has seen more than its share of opposition in front of the abortion facility. They’ve even had people holding a sign that says “abortion is a civil right.” “We know it’s not easy or comfortable to pray outside the Bowen Hills abortion clinic,” said one of the volunteers, “but we continue to hear amazing stories from those who courageously take part.” “I prayed last night outside Marie Stopes,” said another participant. “Lots of opposition ... but also had some support from a friendly passerby at the end of the night.” There’s support from the clergy as well. “It is profoundly contradictory that a culture like ours, which is so concerned with human rights, seems so often unconcerned about the most basic right of all upon which all others depend – the right to life,” said Archbishop Mark Coleridge.
“That is why it is important to have people like those involved in 40 Days for Life who are prepared not only to speak up for life, but to act in defence of life.” Adelaide, Australia

Adelaide’s state, South Australia, legalized abortion in 1969. Abortions are free – covered by Medicare. Most of the abortions take place in a government-run facility that is set far back from the road, making it difficult to speak to women arriving for appointments. But there are still ways of reaching out. One of the volunteers runs a café near the abortion center. And a pregnancy help center operates a shop next door to the café that’s called Reborn Baby Gear. “With Australia being so secular and abortion so well entrenched, it is a difficult battle,” said Alan, the leader in Adelaide. “Nevertheless, it is heartening to see many denominations coming together and we are inspired reading of campaigns held in the snow and sleet in the northern hemisphere.” Alan reports one confirmed baby saved this campaign … and another young woman who now seems likely to choose life “after a long discussion with one of our most enthusiastic volunteers. “ Wellington, New Zealand 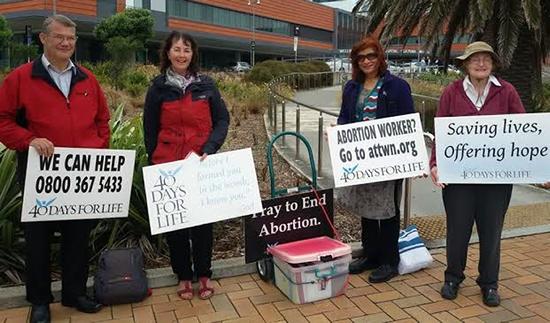 The 40 Days for Life vigil takes place outside Wellington Hospital, which performs more than 2,000 abortions every year. “The hospital advises its clients to avoid us, so our sidewalk counselling efforts are thwarted before we begin,” said Clare, the local campaign leader, “so it is the public we get to share with, offering the pro-life view for consideration.” She is amazed at the number of new people joining the vigil this year. Over a third of the participants are new to 40 Days for Life. One woman offered encouraging words. “She related the story of her past abortions and the anger she felt at having being told her babies were nothing but a bit of mucus,” Clare said. “She hopes we get to meet and help young women in similar situations to hers.”
Today’s devotional is from Rev. John Ensor of PassionLife. Day 33 intention As we pray for the end of abortion, let us pray for the expansion of the pregnancy help center movement worldwide. Scripture The dragon stood before the woman who was about to give birth, so that when she bore her child he might devour it. She gave birth to a male child, one who is to rule all the nations with a rod of iron, but her child was caught up to God and to his throne. — Revelation 12:4-5 Reflection by Rev. John Ensor You don’t need to be a theological scholar to get the essential point of Revelation 12. Something BIG is afoot. It has something to do with the birth of Christ and the children of God. It involves a war in heaven, with powers and principalities beyond our expertise. But the battles are fought here on earth. The crux of the matter centers around the babe of Bethlehem and the cross of Calvary. It continues to unfold down through the ages, through us, the children of God, who put their faith in Christ and take up their cross and follow him. We are waging a war of love against all things that destroy body and soul. The intensity waxes and wanes, but like labor pains, they grow and culminate in new life. The unleashing of legal abortion nearly 40 years ago stirred up prayer (lamentation really). Many were then led to start pregnancy help centers and maternity homes. Today there are over 3,000 such ministries that did not exist 40 years ago. They reflect a movement of God on our watch: Christians driven to give their time and charity to end abortion one woman at a time. Let’s pray this movement expands worldwide. Let's pray for thousands more Christians to start, serve and support pregnancy help centers. Prayer O God, from generation to generation, you have called your people to be the very aroma of life amidst a culture of death. Now it is our turn. Prepare me. Send me. Use me. I am eager to do my part. Stir your people everywhere to take up this great work. Printable devotional To download today’s devotional as a formatted, printable PDF to share:
http://40daysforlife.com/media/day33.pdf
For life,
Posted by Deacon John at 10:36 AM