Dear Deacon John,
I know that people in the abortion business are zealous about their work. That reality hit me at 5:15 am a few years ago ... when I found myself  on an airplane, seated next to a late-term abortionist. I had just spoken outside his abortion facility the day before! His name is LeRoy Carhart, and he was up early on a Sunday to go from his Nebraska center to an abortion location in Maryland. The abortion industry is not about “choice.” It’s about money. Some of these people will drive – or fly – great distances through any weather conditions so they don’t miss a payday. They may be determined, but their work is evil. The Apostle Paul reminds us that our battle is not against flesh and blood. Only God can end this ... and we must trust Him to do so. But we must also be willing to love, share and witness the gospel in the midst of those committed to such darkness.
Germantown, Maryland

Andrew, the local leader in Germantown, was reflecting on something one of the guest speakers said at a 40 Days for Life rally.
“George, one of our faithful prayer warriors, shared his story with us,” Andrew said. “He concluded by encouraging everyone to not grow weary of standing up for the lives of unborn babies.”
"We need to have as much zeal and determination as LeRoy Carhart,” George said.
“That struck me,” Andrew said. “Do we have as much zeal and determination as Carhart? He flies in every single week – rain or snow – to end the lives of these children. We need to remain steadfast in our prayer and fasting for an end to abortion.”
Manchester, New Hampshire 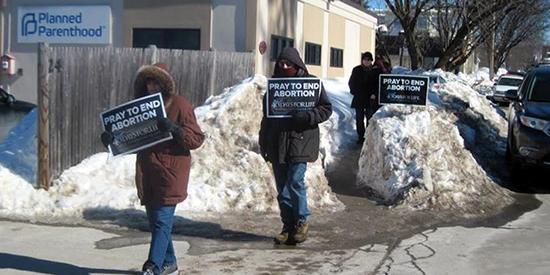 It has been a snowy winter, even by New Hampshire standards. At the 40 Days for Life vigil in Manchester, the vigil participants have been walking along a narrow path between two piles of snow that are several feet high.
Jackie in Manchester says the volunteers did all the shoveling, but “they must circle around in the street as the sidewalk is single-file only.”
Every Thursday is abortion day at Planned Parenthood, and Jackie says there are two priests and a deacon who bring people to pray every Thursday, all year long. “The presence of clergy has been a powerful witness and a huge encouragement,” she said.
Rochester, Minnesota

A volunteer in Rochester said as she was praying outside Planned Parenthood, several cars arrived. At least two of them appeared to belong to women who were arriving for abortion appointments.
It gave the vigil participants specific things – and specific people – to pray about … as two young lives were at risk and time was of the essence.
It was this stark reality that kept the volunteer’s eyes fixed on the Lord.
“Without a miracle and intercession of prayer, at least two children will die today here in Rochester,” she said. “You won’t hear about it on the news, and everyone’s lives will go on as usual, but two children will die and two women’s lives will be changed forever.” If you haven’t been to a vigil yet, the campaign continues until March 29. Set aside an hour … and go out to pray!
Today’s devotional is from Rev. Ben Sheldon, president emeritus of Presbyterians for Life. Day 24 intention Pray that we may realize the generational impact of abortion. Scripture Isaac prayed to the Lord for his wife because she was barren; and the Lord granted his prayer and Rebekah his wife conceived. The children struggled together within her, and she said, “If it is thus, why do I live?” So she went to inquire of the Lord. And the Lord said to her, “Two nations are in your womb, and two peoples, born of you, shall be divided; the one shall be stronger than the other, the elder shall serve the younger.” — Genesis 25:21-23 Reflection by Rev. Ben Sheldon What an answer to prayer! Who dares to say that the unborn are not human, with distinct personality and character right from the moment of conception? This account emphasizes the vitality and uniqueness of the twins who, because of Isaac's prayer for his wife, were conceived in Rebekah's womb. When Rebekah was told by the Lord that the older would serve the younger twin, God already knew that Jacob and Esau would lead turbulent and conflicted lives. God knows us and knows all about us, including our personality and disposition long before we are actually born, indeed, from the moment we are conceived in our mother's womb. What a tragedy of gargantuan proportions that babies, planned and endowed by the Creator, with distinct and unique personalities and with, perhaps, a future and destiny intended for greatness, have their lives snuffed out by cruel abortionists before they ever see the light of day! May our prayers that the dreadful scourge of abortion in our land may vanish be as fervent as Isaac's were for Rebekah. Prayer O, God, you formed us in our mother’s womb and planned a unique and special life and purpose for each of us, and we do thank you. Grant that we may pray and work for an end to abortion, especially in these 40 days, so that no unborn baby you have made may fail to achieve your divine intention for him or her because of intentional abortion. We pray this for the sake of your Son, our Lord Jesus Christ. Amen. Printable devotional To download today’s devotional as a formatted, printable PDF to share:
http://40daysforlife.com/media/day24.pdf
For life,