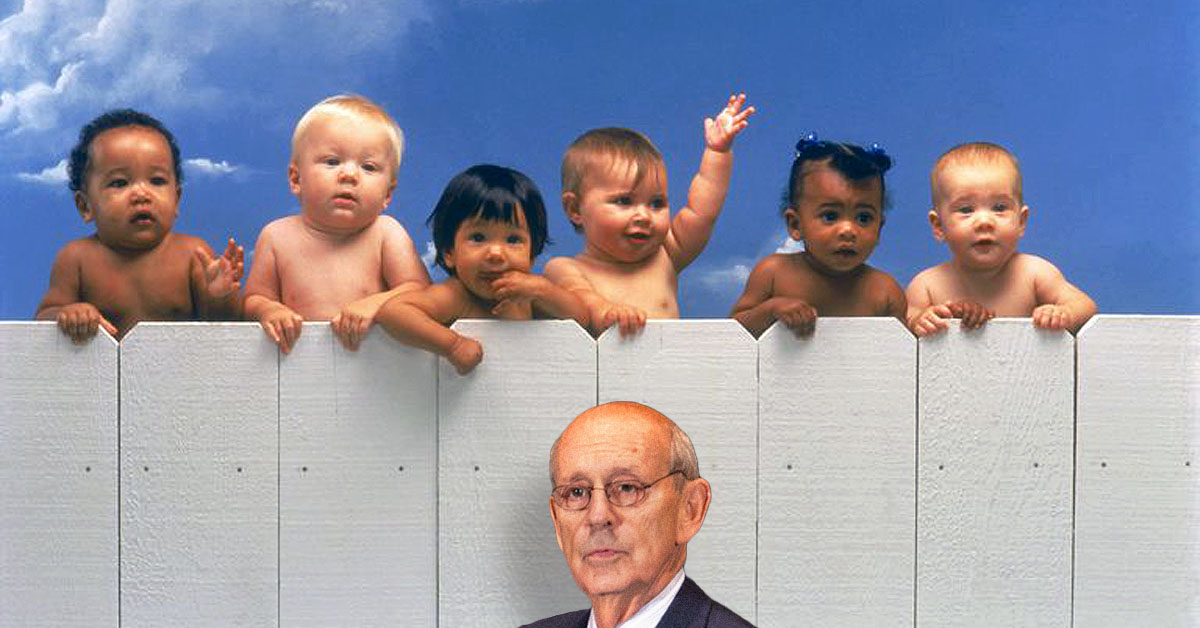 The Babies in the ‘Breyer Patch’

United States Supreme Court justice Stephen Breyer has been making noise about Supreme Court precedent and abortion—and the media is listening. That is because the liberal media is convinced that Roe v. Wadewill be overturned. In their self-imposed hysteria, some in the media recently pointed to Justice Breyer’s dissenting opinion regarding the court overruling precedent.
Breyer dissented to a majority opinion involving Franchise Tax Board of California vs. Gilbert P. Hyatt. The majority decision written by Justice Clarence Thomas overturned a 40-year-old precedent to now “hold that states retain their sovereign immunity from private suits brought in the courts of other states.” This decision allegedly set the stage for the possibility that the Supreme Court could overturn precedent in other cases, such as those established by the abortion decisions of 1973 and the 1992 Planned Parenthood v. Casey decision.
Justice Breyer took note of that, and it prompted one reporter to write:

It is “dangerous,” Breyer concluded, “to overrule a decision only because five members” of the court disagree with it. “Today’s decision can only cause one to wonder which cases the Court will overrule next.” And if there were any doubt which cases Breyer was alluding to in this dark denouement, he cited the portion of Planned Parenthood v. Casey that explained why Roe should be upheld. The justice has hoisted a red flag, alerting the country that the court’s conservative majority is preparing an assault on the right to abortion access.

This writer is not alone in his fear that something dreadful might happen to curtail the killing of preborn babies. Well-known reporter Linda Greenhouse explained that the 1992 Casey decision found that in narrow cases the state does have a compelling interest to regulate abortion, but she noted that even with those restrictions “nothing like what we’re seeing now” could have been foreseen at that time 25 years ago.
In fact, it was the Supreme Court’s Casey decision that discovered the “undue burden” argument, which fundamentally protects women who want abortion, if the regulation of such an abortion imposes an undue burden on her.
So, what is all the ridiculous wailing and flailing really about? Well, the following examples sure make us wonder!
Example number one: In Kansas, the state Supreme Court ruled Fridaythat

“the Kansas Constitution protects a woman’s right to an abortion. . . . The landmark ruling now stands as the law of the land in Kansas with no path for an appeal. Because it turns on the state’s Constitution, abortion would remain legal in Kansas even if the Roe v. Wade case that established a national right to abortion is ever reversed by the U.S. Supreme Court.”

“would make an abortion and attempted abortion a felony. Exceptions would be allowed if the mother’s life is at risk.”

Governor Kay Ivey has now signed this bill, and we can bet that it is sure to face a court challenge and undoubtedly will not go into effect.
Example number three: In Oklahoma,

“the Oklahoma Supreme Court ruled Tuesday that a state law restricting access to drug-induced abortions is unconstitutional, the latest decision by the state’s highest court striking down restrictions on abortions adopted by the Republican-controlled Legislature.”

Given these three examples, the possibility that a Supreme Court action would offer total protection of innocent preborn babies is nigh on impossible—at least for now. This is why we struggle every day to defend the innocent and to educate our fellow citizens, our children, and our lawmakers.
We know that preborn children must not be caught in the thorny web of the Breyer Patch.
These babies are members of our human family. Each human being from his beginning is created in the image and likeness of God, Who has ruled that abortion is a crime. Thou shalt not kill is not an idea; it is a law!
It is incumbent upon each of us to fight for the babies—in the IVF lab, inside his mother, and after birth. This is the way to kill the deadly thorny weeds of abortion-mindedness and propaganda, not only in the Breyer Patch but throughout the culture of death.