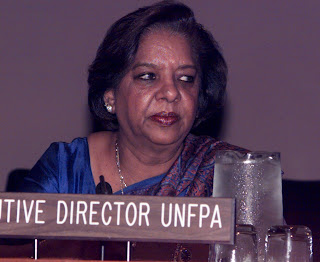 Says Catholic Church Prior to John Paul II was Easier to Work With - "With the passing of Pope Paul VI, everything became much harder"

NEW YORK, August 31, 2007 (LifeSiteNews.com) - During her 14 years at the helm of the United Nations Population Fund (UNFPA), Nafis Sadik always denied the organization's abortion advocacy even in the face of overwhelming evidence. She did not directly name her pro-life enemies nor did she reveal her allies in the battle to establish a global 'right' to abortion.

All that changed after her accolade-filled departure from UNFPA shortly after which she joined the Board of Directors for the Center for Reproductive Law and Policy (CRLP) - the legal arm of the pro-abortion movement in the U.S.

With her distance from UNFPA separated by more years, Sadik has felt more comfortable in revealing her enemies and allies - the Catholic Church (specifically under John Paul II) and 'Catholics for a Free Choice' (CFFC) respectively.

In an article for the Spring 2007 edition of the CFFC magazine 'Conscience', Sadik writes about her alliance with Frances Kissling the foundress of the pro-abortion activist group CFFC. "I was very happy to find in Frances Kissling an ally who not only shared my passion for sexual and reproductive health and rights but had a passion of her own, for her church and its mission," wrote Sadik.

On working with the church on matters related to "sexual and reproductive health and rights" by which Sadik has frequently referred to abortion and contraception, Sadik says: "Until 1978, it was relatively easy for organizations interested in women's sexual and reproductive health and rights to work with the church. We collaborated on programs to counsel engaged couples about family life; we worked together on maternal and child health projects. We agreed that we had a common purpose to save lives, improve health, attack poverty and promote development, and we agreed to disagree about contraceptive technology."

Sadik continues: "With the passing of Pope Paul VI, everything became much harder. The cordial working atmosphere vanished almost overnight and has never returned. Instead, we found distrust, covert opposition and open hostility, not only to contraception but to all aspects of women's empowerment and gender equality."

Her assessment of the JPII papacy is summed up in her opening paragraph: "One of the bitter disappointments of the papacy of John Paul II was that the Roman Catholic Church abdicated its responsibility toward women, and in particular toward women's sexual and reproductive health and rights. For a quarter of a century, the church resolutely opposed all moves toward women's empowerment and gender equality, on the international stage and at the national level."

See the full article by Sadik in the CFFC magazine:
http://www.catholicsforchoice.org/conscience/current/cSpring2007_forfrancesitspersonal.asp