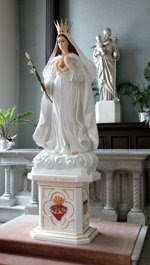 The statue of Our Lady of America on display at the Basilica of St. Louis.

Will America Be Turned into a Beacon of Purity? Some see Great Hope in "Our Lady of America"

WASHINGTON, DC, August 13, 2007 (LifeSiteNews.com) - Some say it will take a miracle to turn America around to purity. America is known throughout the world, especially in developing nations, as a beacon of impurity. Since the 1960s Hollywood has produced and exported pornography, both subtle and explicit, around the globe.

However, just prior to America's descent into the sexually quagmire of the 1960's, a nun in Ohio began receiving messages from Heaven; messages from "Our Lady of America." From the start, those messages called for purity. The first words that Sister Mary Ephrem (Mildred Neuzil) heard from the Lady on September 26, 1956 were: "I am Our Lady of America. I desire that my children honor me, especially by the purity of their lives."

Essentially, the messages teach that purity in love is pleasing to Jesus and call for reformation of lives regarding purity, a change that is impossible without great love for God. They also warn that if reformation does not occur there will be great suffering.

In what some today call a prophetic warning, given its timing in relation to the moral destruction of the sexual revolution, Sister Mary Ephrem recorded these words in September 1957: "My beloved daughter, what I am about to tell you concerns in a particular way my children in America. Unless they do penance by mortification and self-denial and thus reform their lives, God will visit them with punishments hitherto unknown to them."

Peace, say the messages, will be restored to America once the nation embraces purity.

"My child, there will be peace, as has been promised, but not until my children are purified and cleansed from defilement, and clothed thus with the white garment of grace, are made ready to receive this peace, so long promised and so long held back because of the sins of men."

The challenge of responding to the messages from heaven does not rest with the faithful alone. The bishops of America have a role to play as well. "Our Lady of America" asked that a statue in her honor be placed in the National Shrine of the Immaculate Conception in Washington, D.C.

Devotion to the Mother of God under the title of "Our Lady of America" was approved in 1963 by former Archbishop of Cincinatti, OH, the late Paul Francis Leibold. And since then, many other bishops have taken part publicly in the devotion.

The most recent bishop to take up the cause is St. Louis Archbishop Raymond Burke, one of the leading bishops in the fight for the culture of life in the United States. On May 31 of this year, Archbishop Burke, a renowned canon lawyer, issued a letter of approval about devotion to "Our Lady of America". The Archbishop of St. Louis sent a copy of his letter to all bishops in the United States. (See Archbishop Burke's letter:
http://www.ourladyofamerica.com/pdf/OpinionLetter-May-2007.pdf )

During this month of August, the statue of Our Lady of America is on display at the Basilica of St. Louis.

Sister Mary Ephrem died in 2000, and the sole living member of her convent in Ohio, Sister Mary Joseph Therese, had this to say of purity and for her hopes once the statue is placed in the National Shrine. "We encourage any priest or Catholic youth leader to ask the young people to carry this message of purity," she said on August 10. "After the Bishops of the United States have that procession, and place into the National Shrine of the Immaculate Conception, the statue of Our Lady of America, holding out the lily of purity, then a formal program will go forward to enlist many, many, young people as 'Torchbearers of The Queen.' "

Sister Mary Joseph Therese said that once the statue is enshrined in the National Shrine in Washington, and the call to purity heeded, great graces from heaven are expected to flow through America.

The messages said that the National Shrine would become "a place of wonders." If heaven's wishes are followed, said Sister Mary Ephrem "greater miracles than those granted at Lourdes and Fatima would be granted here in America, the United States in particular."

Lourdes, France and Fatima, Portugal are known world wide as sites of miraculous physical healings. Numerous medically unexplainable healings have taken place at those locations where the Mother of Christ is said to have appeared.

However, the miracles destined for America are to be not "miracles of the body, but of the soul." Considering Hollywood's current state, one such miracle could be the remaking of America into a beacon of purity for the world.

That sounds very much like a possibility, at least according to the messages.

According to Sister Mary Ephrem's messages, heaven seems to have America in mind for a particular role in spreading purity. "My child, I entrust you with this message that you must make known to my children in America. I wish it to be the country dedicated to my purity . . . I desire, through my children of America, to further the cause of faith and purity among peoples and nations."