Special to LifeSiteNews.com by Dan Zeidler 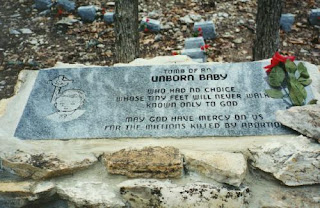 TOMB OF AN UNBORN BABY

Milwaukee's Holy Cross Cemetery - Resting place for over 1,000 aborted babies
A fitting place to Pray, to ask Forgiveness, to Heal, and to Resolve to end the Barbarism

"Let us not forget them!"

Holy Cross Cemetery, a beautiful final resting place for thousands of Milwaukee-area Catholics, also has a deeply-moving section set aside for hundreds of babies and young children who died shortly after birth or in the early years of life. A visitor to this section will see small gravestones with engravings such as, "Our Little Angel Derek," "Our Precious Baby Girl Allison," "Our Darling Son John." In some cases, graves are decorated with little toys or stuffed animals. Some dates on the gravestones indicate the baby lived only a day or two, others a year or two.

How did the mangled bodies of these babies come to their final, peaceful resting place in this cemetery, alongside children only slightly older than they?

The first group of aborted babies who were buried at Holy Cross came from a 1984 incident in Milwaukee. A driver for a local laboratory, making rounds at a number of medical clinics and offices, picked up at one of her stops - a Milwaukee abortion mill - the bodies of aborted babies to be taken to the laboratory apparently for analysis and disposal.

According to the news reports, the driver became nauseated as a result of the odor and decided to dump the tiny bodies into a dumpster located at one of her next stops. Later, some young children playing in the area looked into the dumpster and found what they later described to police as "little people".

With the county's permission, the cooperation of Archdiocesan cemetery officials and the help of concerned citizens, arrangements were made to bury these "little people" in a dignified and prayerful manner in the children's section of Holy Cross Cemetery.

The second group of aborted babies numbering approximately 1,200 came from a loading dock of a laboratory in Illinois where pro-lifers, acting on a tip, were able over a period of months in 1988 to recover this enormous number of mutilated little bodies. These babies, as those from the first group, were buried at Holy Cross in the children's section following a prayer service attended by people from all across Wisconsin.

Subsequently, a monument with a powerful message was erected to mark the area of these graves. The main stone, approximately six feet high, has an engraved image of Christ holding a young child and surrounded by other children. The inscription below states, "'Let the children come to me. Do not hinder them. The Kingdom of God belongs to such as these.' (Mt 19:14)". Alongside the main stone is a smaller stone with the following inscription, "This monument stands as a testimony to the Sanctity of Human Life. Among these graves of children are included preborn babies, victims of abortion. 'The reason why the world does not know us, is that it did not know Him. We are God's children now.' (1 Jn 3:1)" The gravesite of the "Little People" has its own marker, as does the grave of the 1,200 babies which reads, "1200 unborn children killed by 'legalized' abortion, February 9, 1988 to September 7, 1988 - Holy Innocents of God". The stone marking the grave of the 1,200 children also has two other quotations, "A cry was heard in Rama, Rachel weeping for her children" (Mt 2:24), and "He will wipe every tear from their eyes" Rev. 21:4 A number of other aborted babies are also buried in close proximity to these two groups of aborted children. This mass gravesite has become a place of prayer for pro-life people, and also a place where post-abortion women come to mourn, to ask forgiveness, and to pray for healing. Standing some distance away, at the corner of the children's section, is an impressive larger monument, also of Christ with the little children, and the same Gospel quote, "Let the little children come to me …" Yes, let the children come to the Lord. And let us not forget them! Let us come often to this, their final resting place, this sacred ground. Let us come prayerfully trusting in God's infinite love and mercy that the babies buried here have finally found Peace in Him. Let us pray for their mothers and fathers to be reconciled with God and with the children they have aborted. Peace and reconciliation are possible. Christ's mercy is over-flowing! And let us resolve to end this "legalized" barbarism that is not only killing over a million children a year and gravely wounding their mothers and fathers, it is suffocating our society. May the breath and life of Christ renew us and convert our hearts to His plan for Life and Love! Let us not forget them! _____________________ The author lives near Milwaukee's Holy Cross Cemetery and assisted in the burial of the "Little People" in 1984. He can be reached at the following e-mail address: sanctityoflife@gmail.com
Posted by Deacon John at 10:51 PM