AMERICA/MEXICO - March for Life on Sunday, May 25 in all the nation’s dioceses 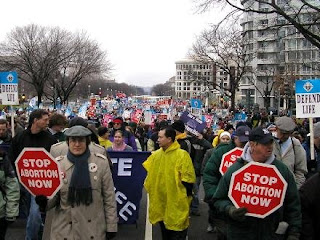 Mexico City (Agenzia Fides) - The Bishops' Committee for the Laity (DELAI) of the Mexican Bishops' Conference has asked that there be a March for Life held on Sunday, May 25 in all the nation's diocese. Representatives from the 29 dioceses signed their commitment in this city to carrying out the public demonstrations for life, using all means possible, in communion and communication with each Bishop and each Diocesan Council for the Laity, as well as lay organizations, and Catholic networks that defend the right to life from conception to natural death.
The March has been organized precisely when inside the national Supreme Court, a debate is taking place between pro-life and pro-abortion activists, following the legalization of abortion, up until 12 weeks' gestation, in the Federal District. The demonstrations of May 25, the statement says, "should be promoted, organized, and led by the Diocesan Councils for Laity or lay persons within each diocese, always leading to a reflection on the subject of life, offering juridical, medical, social, and sociological reasons," to defend life.
The goal of the demonstration "is that from all corners of the country, organized laity can openly show in public their support for life through: walks, written articles, editorial pieces in diocesan publications, posters...mass media such as Internet, television, radio, magazines, bulletins, cards, flags, and whatever means possible to show support for life from conception onwards, as a living commitment and a coherence of life between what we believe and what we live in our everyday life, the marvelous gift of life."
In response to this call, many Bishops have organized demonstrations in their dioceses. For example, Bishop Mario de Gasperin of Queretaro has asked all faithful in the parishes and movements to participate in the March for Life on Sunday. In a message sent to all priests, deacons, and religious of the Diocese, Bishop de Gasperin asked that they "elevate their prayers to the God of life, through the celebration of Masses offered for the defense of life, from conception until natural death." He also asked that they invite all laity to take active participation in the March for Life, using whatever means in their power to promote the culture of life, such as written publications, electronic mass media, flyers, and whatever means possible. The March for Life will begin at 9:30am, from various locations in the city, to then converge at noon in the city's Historic Center.
Archbishop Jose G. Martin Rabago of Leon has asked priests to promote the event and encourage the faithful to meet in the indicated location and thus begin the march with a festive spirit. The event will conclude in the Plaza Principal of Leon, with testimonies in favor of life from conception onwards.