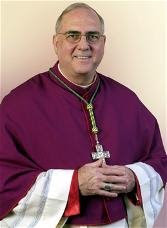 Kansas, May. 9, 2008 (CWNews.com) - Archbishop Joseph Naumann of Kansas City has announced that Governor Kathleen Sebelius should not receive Communion because of her support for legal abortion.

In a column appearing on May 9 in the archdiocesan newspaper, The Leaven, the archbishop said that Governor Sebelius has sent a "spiritually lethal message" by implying that she could remain a Catholic in good standing while supporting abortion on demand.

The archbishop's column cited in particular the governor's veto of the Comprehensive Abortion Reform Act, which would have required abortionists to inform women about the effects of the procedure and alternatives to abortion.

The governor's stand in favor of abortion is particularly painful, Archbishop Naumann wrote, because Sebelius is a Catholic. He reported that he had met with her "several times over many months to discuss with her the grave spiritual and moral consequences of her public actions." Because the governor has not rejected his pleas and her public stand constitutes a scandal to the faithful, the archbishop said that he has now directed her to refrain from receiving Communion. Archbishop Naumann reported that he has asked Governor Sebelius to accept this directive, so that she will "not require from me any additional pastoral actions."

The governor will be welcomed back to Communion, the archbishop wrote, if she acknowledges her error, goes to Confession, and makes "a public repudiation of her previous efforts and actions in support of laws and policies sanctioning abortion."