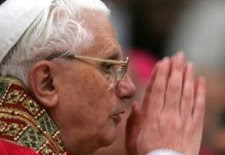 VATICAN - Benedict XVI tells Pro-Life Movement: "It is necessary to bear concrete witness to the fact that respect for life is the first form of justice that must be applied. For those who have the gift of faith this becomes an imperative that cannot be deferred."

Vatican City (Agenzia Fides) - "Looking back on the past thirty years and considering the present situation, we cannot but recognize that, in practical terms, defending human life has become more difficult today, because a mentality has been created that progressively devalues human life and entrusts it to the judgment of individuals. A consequence deriving therefrom is lessened respect for the human person, a value that lies at the foundation of any form of civil coexistence, over and above the faith a person may profess." This was what the Holy Father Benedict XVI said in addressing members of the Italian Movement for Life in an audience on May 12, on the occasion of the 30th anniversary of the legalization of abortion in Italy.
Considering the many causes that lead to such an unfortunate decision as abortion, the Church "never ceases to repeat that the sacred value of the existence of every man finds its origins in the design of the Creator," the Holy Father said, while also encouraging "every initiative in support of the woman and the family in creating favorable conditions for the acceptance of life, and the protection of the institution of the family which is based on the marriage between a man and a woman." Benedict XVI also recalled that, "The possibility of terminating a pregnancy not only has not resolved the problems afflicting many women and no small number of families, but it has opened another wound in our societies, already so afflicted by profound sufferings."
The Holy Father also acknowledged that in spite of the great effort carried out during these years, and not only by the Church, in trying to remedy the needs and difficulties of families, "diverse problems continue to afflict our modern-day society, impeding many young people from nurturing the desire to marry and form a family, due to the negative conditions in which they live. The lack of job security, laws that often lack a consideration for motherhood, the uncertainty of being able to support children, are among some of the obstacles that seem to stifle the demands of a fruitful love and open the door to a growing sense lack of confidence in the future." Benedict XVI then asked that all unite efforts "so that institutions once again focus their activities on defense of human life and priority concern for families, where life is born and develops," and he also pointed out the need to help families through legislative means, in order to facilitate "their formation and their educational work in the difficult social context of today."
The Pope later spoke of the urgent need for Christians to protect life "with courage and love, in all its phases": "It is necessary to bear concrete witness to the fact that respect for life is the first form of justice that must be applied. For those who have the gift of faith this becomes an imperative that cannot be deferred, because Christ's followers are called to be 'prophets' of a truth that can never be erased: God alone is the Lord of life. Every man is known and loved, willed and guided by Him."
In concluding his address, the Holy Father recalled the 60th anniversary of the Universal Declaration of Human Rights of man and his recent address given in the United Nations. He described the "extremely praiseworthy" efforts of the Movement for Life in the political sphere, "assisting and encouraging the institutions to ensure that correct recognition is given to the words 'human dignity.'" Lastly, Benedict XVI thanked the Movement for their service to the Church and to society saying, "how many human lives have you saved from death! Continue along this path and do not be afraid, so that the smile of life may triumph on the lips of all children and their mothers."