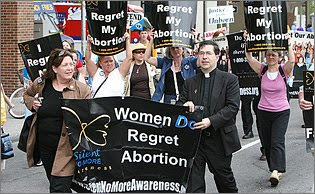 STATEN ISLAND, Ny., May 9 /Christian Newswire/ -- A Mother's Day fundraising appeal by abortion provider Planned Parenthood was decried today by leaders of the Silent No More Awareness Campaign, the world's largest network of women and men harmed by abortion.
"For Planned Parenthood to ask for 'Mother's Day Gifts' is beyond appalling," said Janet Morana, Co-Founder of SNMAC. "This is an organization that has turned Mother's Day into a painful reminder of terminated children for millions and millions of women. To ask for money on this day so that it can traumatize even more women is the ultimate in insensitivity."
"The irony of Planned Parenthood asking for Mother's Day donations in honor of mothers and daughters hardly needs pointing out," added Georgette Forney, another SNMAC Co-Founder. "Planned Parenthood already took our money when they aborted our children; I guess now they want money for the ones they missed."
"Cecile Richards, Planned Parenthood's president, writes with pride that one of her daughters is carrying on her family's legacy of fighting for abortion," added Ms. Forney. "Ms. Richards has admitted, but refused to discuss, that she aborted one of her other children. I wonder what legacy she thinks she left that baby?"
Since the launching of the Silent No More Awareness Campaign in 2003, 2,326 women and men have shared their testimonies publicly at over 200 gatherings in 44 states and six countries where more than 15,000 spectators have heard the truth about abortion's negative aftereffects. More than 4,100 people are registered to be Silent No More. Raising awareness about the hurtful aftermath of abortion and the help that is available to cope with the pain are two of the Campaign's goals.
The Silent No More Awareness Campaign is a joint project of Anglicans for Life and Priests for Life. For more information, please visit our website:
www.SilentNoMoreAwareness.org
Posted by Deacon John at 11:19 AM