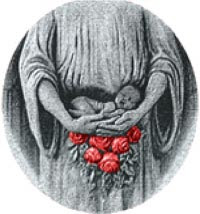 Death tolls from the Chinese quake now top 65,000. Hollywood's Sharon Stone wonders aloud whether "karma" explains the tragedy because (she said) the Chinese are "not nice to the Dalai Lama, who is a good friend of mine."

Amnesty International reports hopes are fading that the Beijing Olympics may lead China to reform, warning in an April report: "It is increasingly clear that much of the current wave of repression is occurring not IN SPITE OF the Olympics, but actually BECAUSE OF the Olympics."

But to me the most shocking reminder of how horrifying the Chinese government remains lies latent in this week's headlines: "One-Child Policy Has Exceptions After China Quake," as the Associated Press wrote.

Families with only one child killed in the earthquake "can obtain a certificate to have another child, the Chengdu Population and Family Planning Committee in the capital of hard-hit Sichuan province said."

The government will give you a certificate so you can have another child? How big of them.

Read  the rest of this article here: MAGGIE GALLAGHER